Constant-time (CT) dipolar heteronuclear multiple quantum coherence (D-HMQC) has previously been demonstrated as a method for proton detection of high-resolution wideline NMR spectra of spin-1/2 nuclei with large chemical shift anisotropy (CSA). However, 1H transverse relaxation and t1-noise often reduce the sensitivity of D-HMQC experiments, preventing the theoretical gains in sensitivity provided by 1H detection from being realized. Here we demonstrate a series of improved pulse sequences for 1H detection of spin-1/2 nuclei under fast MAS, with 195Pt SSNMR experiments on cisplatin as an example. First, a new t1-incrementation protocol for D-HMQC dubbed Arbitrary Indirect Dwell (AID) is demonstrated. AID allows the use of arbitrary, rotor asynchronous t1-increments, but removes the constant time period from CT D-HMQC, resulting in improved sensitivity by reducing transverse relaxation losses. Next, we show that short high-power adiabatic pulses (SHAPs), which efficiently invert broad MAS sideband manifolds, can be effectively incorporated into 1H detected symmetry-based resonance echo double resonance (S-REDOR) and t1-noise eliminated D-HMQC experiments. The S-REDOR experiments with SHAPs provide approximately double the dipolar dephasing, as compared to experiments with rectangular inversion pulses. We lastly show that sensitivity and resolution can be further enhanced with the use of swept excitation pulses as well as adiabatic magic angle turning. 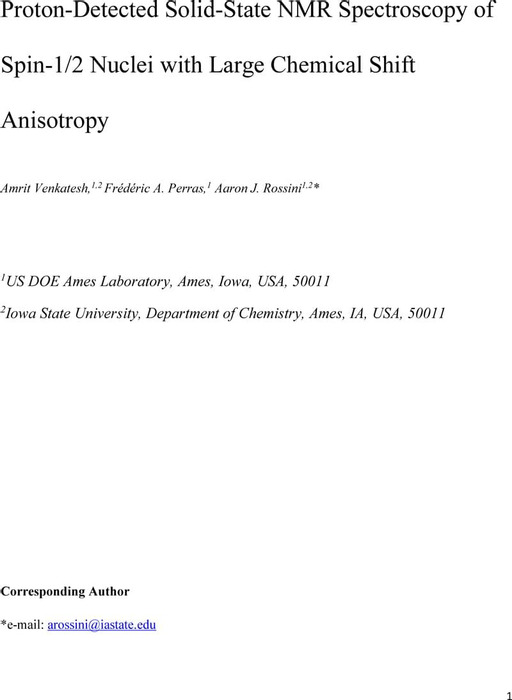 There are no conflicts of interest.