Role of Electronic Excited State in Kinetics of the CH2OO + SO2 ! HCHO + SO3 Reaction

In this work, kinetics of the CH2OO + SO2 ! HCHO + SO3 reaction was studied by ring-polymer molecular dynamics (RPMD). To perform RPMD calculations, multi-reference configuration interaction (MRCI) was first carried out to compute data for constructing potential energy surface (PES) through a kernel regression method. On the basis of the present MRCI calculations, the statics multi-state mechanism involving the lowest-lying singlet excited state (denoted by S 1) was proposed, which is di?erent from the previously proposed mechanism with the lowest-lying triplet state (denoted by T1). Moreover, the present RPMD calculations predicted the rate coe?cient of 3:95?10􀀀11cm3 molecule􀀀1s􀀀1 at the room temperature (namely 298 K), agreeing with the previously reported experimental values. Finally, based on the present calculations, a probable dynamics mechanism was discussed, where the produced HCHO molecule was proposed to be in a vibrationally excited state. This needs further experimental and theoretical observation in the future. 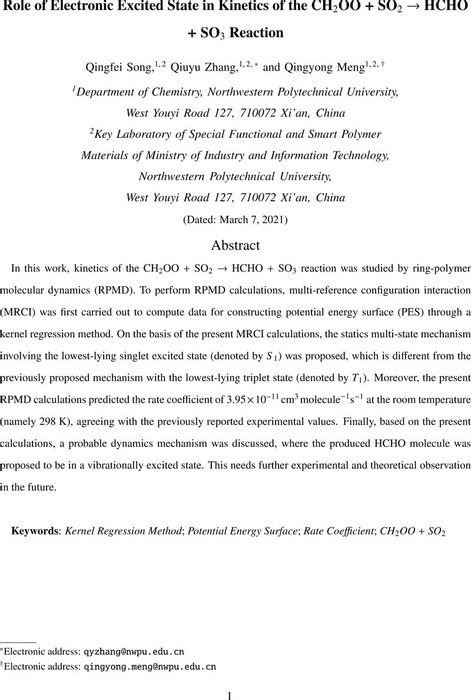 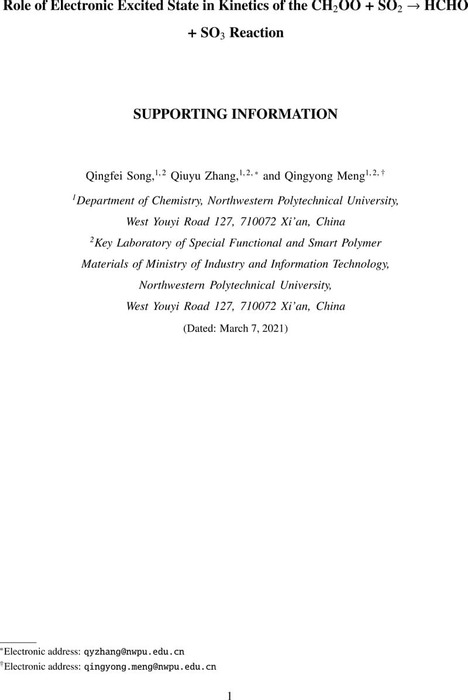 We are encoding your file so that it is compatible across browsers, depending on file size and type this may take some time.
supporting-information