Epidermal growth factor receptor tyrosine kinase (EGFR-TK) is one of the key regulators that exhibit pivotal role in proliferation of cancer cell. Quinazolinones are studiedly widely as effective EGFR-TK inhibitor because of their higher affinity to bind with adenosine triphosphate (ATP) binding site of receptor tyrosine kinases. However, their toxicity due to non-specific binding to tyrosine kinase in non-cancerous normally dividing cells of the body limits its applicability as a cancer therapeutics. In the present investigation a series of thirty-four novel synthesized thiazolo- [2, 3-b] quinazolinones were studied in silico as EGFR-TK inhibitors. All the thirty-four compounds were screened against EGFR-TK domain using multiple software’s (AutoDock Vina, Argus Lab, YASARA, and MOE). The interactions of the ligands with amino acid residues, namely, Lys721, Met769 and Asp831 of the active site were through the functional groups on aryl substituents at position 3 and 5 of the thiazolo- [2, 3-b] quinazolinone scaffold. The methyl substituents at position 8 of the ligands had prominent hydrophobic interactions in the active site cavity of EGFR-TK domain. The compounds 5ab, 5aq, and 5bq were predicted to be non-toxic and drug-like by in silico ADMET investigations. These compounds were considered for further investigation due to their non-toxicity and higher docking score ranking in different docking methods. The molecular dynamics (MD) simulation for 100 ns of docked complexes revealed the stability of these compounds. The binding free energy determined using Molecular Mechanics Generalized Born Model and Solvent Accessibility (MM-GBSA) method indicate that thiazolo- [2, 3-b] quinazolinone has high inhibitory efficacy similar to the standard drug, erlotinib (5ab - 22.45, 5aq -22.23, 5bq -20.76, and erlotinib -24.11 kcal/mol). In silico studies and MD simulations indicated that compounds (5ab, 5aq and 5bq) could be potential EGFR-TK inhibitors and require further validation as cancer therapeutics using carcinoma cell lines. 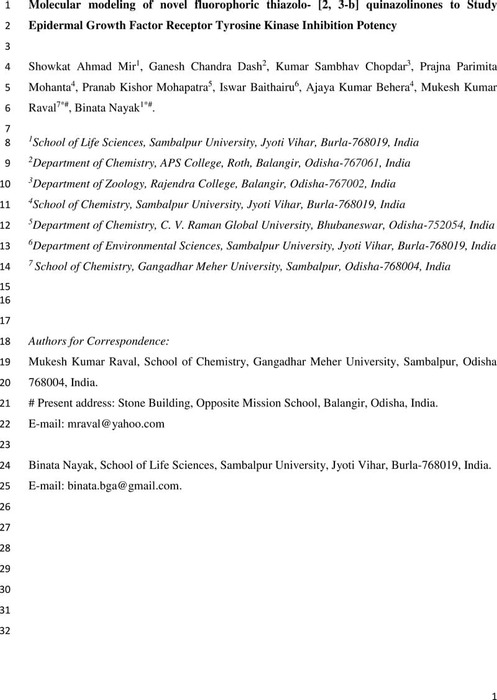 We are encoding your file so that it is compatible across browsers, depending on file size and type this may take some time.
Mir et al 2021-ChemRxiv V1

We are encoding your file so that it is compatible across browsers, depending on file size and type this may take some time.
Mir et al 2021 ChemRxiv - Supplimetary Material