A kinetic investigation of the vapor phase Hofmann elimination of tert-butylamine over H-ZSM-5 reveals a carbocation mediated E1-like mechanism, where isobutene and ammonia are exclusively produced over Brønsted acid sites. Hofmann elimination kinetics are found to be insensitive to Al content or siting, varying only with alkylamine carbocation stability (rtertiary > rsecondary > rprimary). Under conditions of complete tert-butylamine surface coverage, experimentally measurable apparent kinetics are directly equivalent to the intrinsic kinetics of the rate determining unimolecular surface elimination. The direct measurement of elementary step kinetics served as a water-free reactive probe, providing a direct measurement of the impact of water on solid Brønsted acid catalyzed chemistries at a microscopic level. Over a range of temperatures (453‒513 K) and tert-butylamine partial pressures (6.8×10-2‒6.8 kPa), water reversibly inhibits the rate of Hofmann elimination. Despite expected changes in aluminosilicate hydrophobicity, the water-induced inhibition is found to be insensitive to Al content, demonstrated to be due to one water molecule per Brønsted acid site. Regardless of the significant reduction in the rate of Hofmann elimination, kinetic interrogations and operando spectroscopic measurements reveal that the coverage of TBA adsorbed on H-ZSM-5 is unaltered in the presence of water. Cooperative adsorption between the tert-butylammonium surface reactant and water adsorbed on a neighboring framework oxygen is proposed to be responsible for the observed rate inhibition, the surface dynamics of which is quantitatively captured through kinetic modeling of experimental rate measurements. 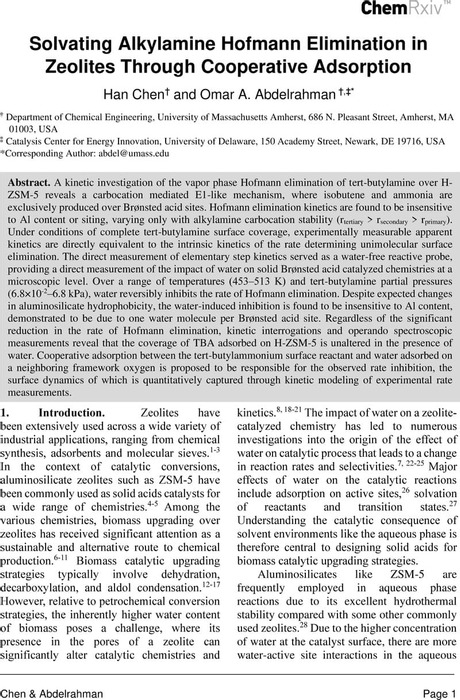 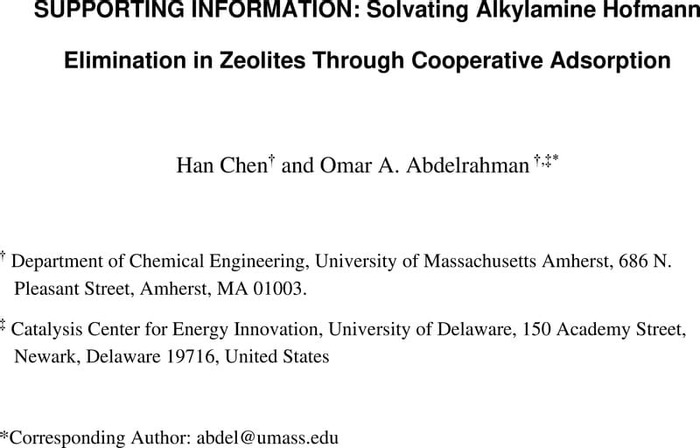 We are encoding your file so that it is compatible across browsers, depending on file size and type this may take some time.
Supporting Information Hofmann Elimination Abdelrahman

We are encoding your file so that it is compatible across browsers, depending on file size and type this may take some time.
Matlab Hofmann Elimination Abdelrahman