Underpotential deposition (UPD) is a phenomenon where atoms of an element M are deposited from ions Mn+ on a substrate S at potentials more positive than for the deposition of Mn+ on M. These systems have been studied for more than a century and are interesting from both the applied and the fundamental point of view. Despite the vast literature on the subject, there is no thermodynamic parameter so far able to characterize an UPD system. Even if the so-called “UPD shift” has been used for decades, the limitations of this parameter has been fully recognized in the field. Herein, using a simple Nernstian treatment and straightforward measurements, we show how to measure and calculate a new proposed fundamental thermodynamic parameter namely, the “Standard UPD potential”. We showed results for the deposition of Cu+2 on Au in acidic media, in solutions containing ClO4- or SO4-2 anions. We obtained Standard UPD potential= 0.65 ± 0.02 V, independently of the concentration of the acid and the nature of the anion. 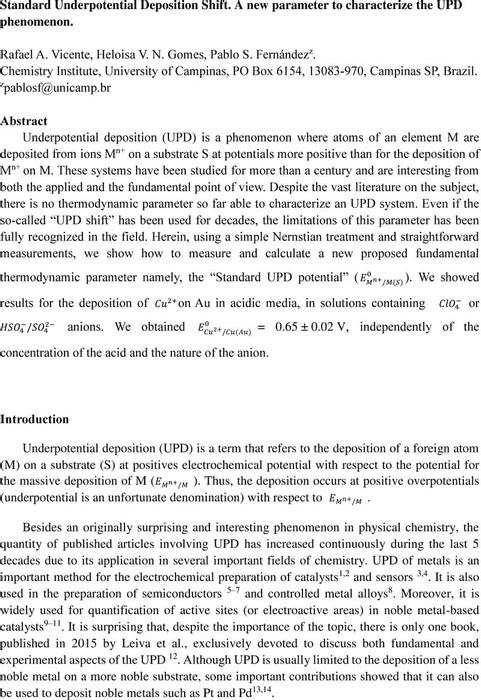 We are encoding your file so that it is compatible across browsers, depending on file size and type this may take some time.
SI-Vicente et al. ChemRxiv

I declare not conflict of interest