Deep generative models have shown the ability to devise both valid and novel chemistry, which could significantly accelerate the identification of bioactive compounds. Many current models, however, use molecular descriptors or ligand-based predictive methods to guide molecule generation towards a desirable property space. This restricts their application to relatively data-rich targets, neglecting those where little data is available to sufficiently train a predictor. Moreover, ligand-based models often bias molecule generation towards previously established chemical space, thereby limiting their ability to identify truly novel chemotypes. In this work, we assess the ability of using molecular docking via Glide – a structure-based approach – as a scoring function to guide the deep generative model REINVENT and compare model performance and behaviour to a ligand-based scoring function. Additionally, we modify the previously published MOSES benchmarking dataset to remove any induced bias towards non-protonatable groups. We also propose a new metric to measure dataset diversity, which is less confounded by the distribution of heavy atom count than the commonly used internal diversity metric. With respect to the main findings, we found that when optimizing the docking score against DRD2, the model improves predicted ligand affinity beyond that of known DRD2 active molecules. In addition, generated molecules occupy complementary chemical and physicochemical space compared to the ligand-based approach, and novel physicochemical space compared to known DRD2 active molecules. Furthermore, the structure-based approach learns to generate molecules that satisfy crucial residue interactions, which is information only available when taking protein structure into account. Overall, this work demonstrates the advantage of using molecular docking to guide de novo molecule generation over ligand-based predictors with respect to predicted affinity, novelty, and the ability to identify key interactions between ligand and protein target. Practically, this approach has applications in early hit generation campaigns to enrich a virtual library towards a particular target, and also in novelty-focused projects, where de novo molecule generation either has no prior ligand knowledge available or should not be biased by it. 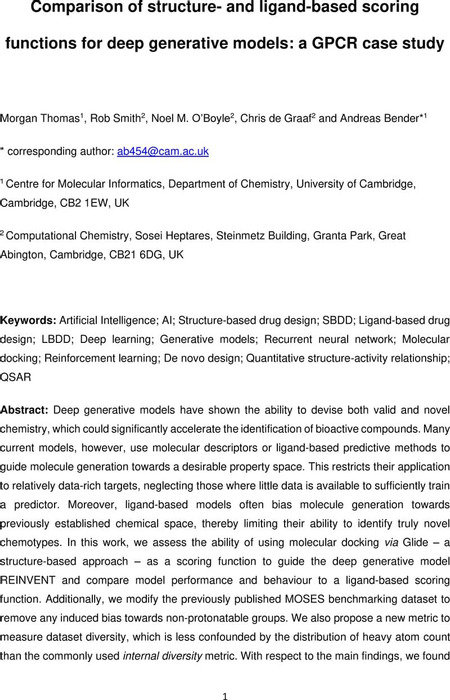 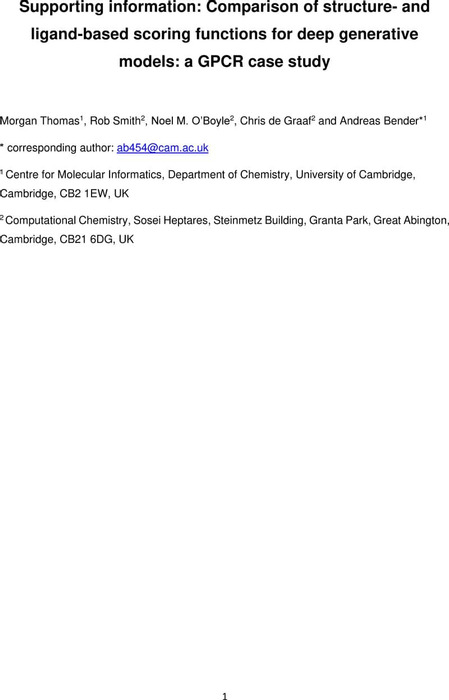 We are encoding your file so that it is compatible across browsers, depending on file size and type this may take some time.
Supporting information

We are encoding your file so that it is compatible across browsers, depending on file size and type this may take some time.
Additional file 2

We are encoding your file so that it is compatible across browsers, depending on file size and type this may take some time.
data