Heterogenized photoredox catalysts provide a path to generating chemicals in an environmentally friendly way, with facile reuse of catalysts in batch or continuous processes. In this study, heterogenized iridium complexes as photoredox catalysts were assembled via covalent attachment to three metal oxide surfaces (ITO, ZrO2, Al2O3) either in the form of thin films or nanopowders and tested as photoredox catalysts for reductive dehalogenation of bromoacetophenone to acetophenone. All catalysts produced acetophenone with high conversions and yields. The fastest reactions were complete in fifteen minutes under mild conditions using Al2O3 surfaces, which provided the most robust and reusable supports. The catalytic performance was compared on both nanopowder and thin film supports, showing that both constructs could be used for photoredox catalysis. The nanopowder-based catalysts resulted in faster and more efficient catalysis, while the thin film-immobilized catalysts were more robust and easily reused. Importantly, the thin film constructs show promise for future photoelectrochemical and electrochemical photoredox setups. Finally, all catalysts could be reused 2-3 times, performing at least 1000 turnovers with Al2O3 supports, highlighting that heterogenized catalysts can perform photoredox catalysis in an environmentally friendly fashion. 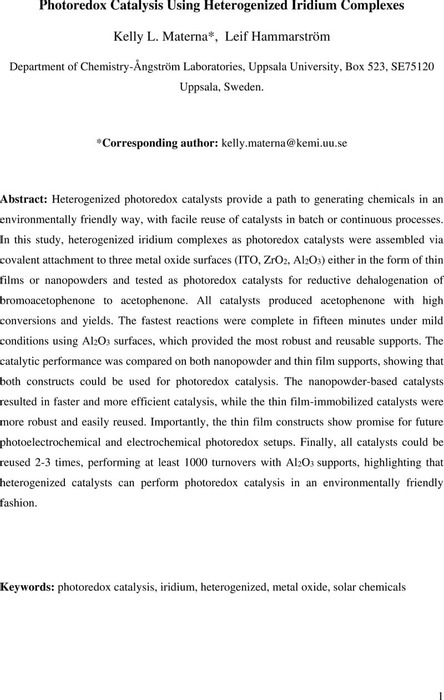 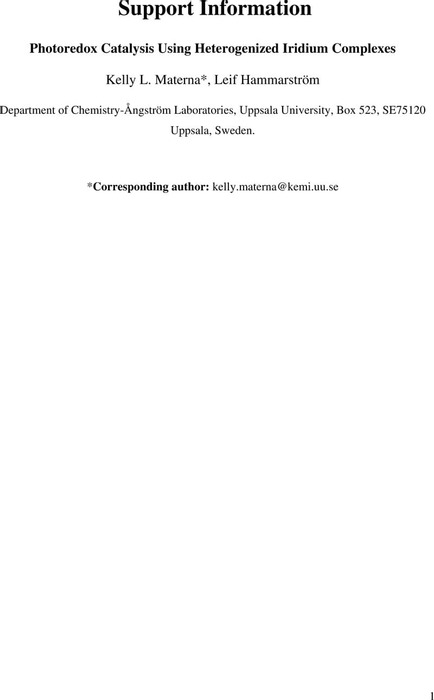 We are encoding your file so that it is compatible across browsers, depending on file size and type this may take some time.
Materna SupportingInformation