To realize a sustainable, carbon-free society, catalysts for the synthesis of ammonia using renewable energy under mild reaction conditions (<400 °C, <10 MPa) are needed. Ru-based catalysts are currently the most promising candidates; however, Ru is expensive and of low abundance. Here, we discovered that encapsulation of Co nanoparticles with BaO enhanced the ammonia synthesis activity of the Co, and that a simple Ba-doped Co/MgO catalyst pre-reduced at an unusually high temperature of 700 °C ([email protected]/MgO-700red) showed outstanding ammonia synthesis activity. The ammonia synthesis rate (24.6 mmol gcat−1 h−1) and turnover frequency (0.255 s−1) of the catalyst at 350 °C and 1.0 MPa were 22 and 64 times higher, respectively, than those of the non-doped parent catalyst. At the same temperature but higher pressure (3.0 MPa), the ammonia synthesis rate was increased to 48.4 mmol gcat−1 h−1, which is higher than that of active Ru-based catalysts. Scanning transmission electron microscopy and energy dispersive X-ray spectrometry investigations revealed that after reduction at 700 °C the Co nanoparticles had become encapsulated by a nano-fraction of BaO. The mechanism underlying the formation of this unique structure was considered to comprise reduction of oxidic Co to metallic Co, decomposition of BaCO3 to BaO, and migration of BaO to the Co nanoparticle surface. Spectroscopic and density-functional theory investigations revealed that adsorption of N2 on the Co atoms at the catalyst surface weakened the N2 triple bond to the strength of a double bond due to electron donation from the Ba atom of BaO via adjacent Co atoms; this weakening accelerated cleavage of the triple bond, which is the rate-determining step for ammonia synthesis. 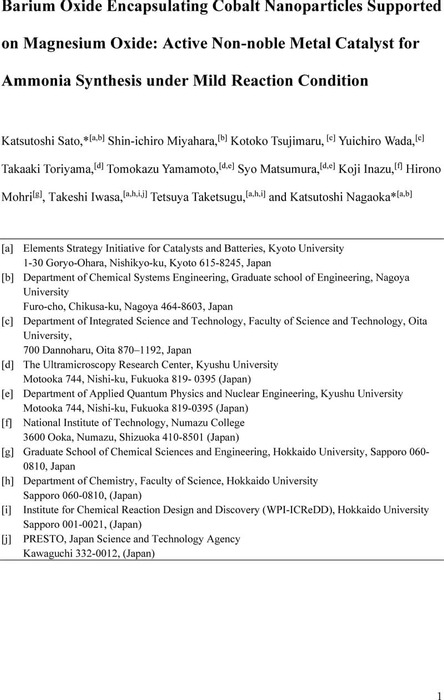 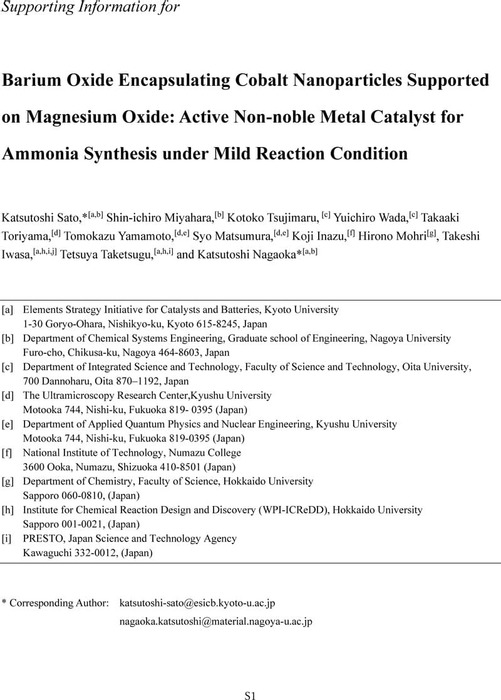 We are encoding your file so that it is compatible across browsers, depending on file size and type this may take some time.
Nagaoka SI