Silicon carbon void structures (Si-C) are attractive anode materials for Lithium-ion batteries to cope with the volume changes of silicon during cycling. In this study, Si-C with varying Si contents (28 ‑ 37 %) are evaluated in all-solid-state batteries (ASSBs) for the first time. The carbon matrix enables enhanced performance and lifetime of the Si-C composites compared to bare silicon nanoparticles in half-cells even at high loadings of up to 7.4 mAh cm-2. In full cells with nickel-rich NCM (LiNi0.9Co0.05Mn0.05O2, 210 mAh g-1), kinetic limitations in the anode lead to a lowered voltage plateau compared to NCM half-cells. The solid electrolyte (Li6PS5Cl, 3 mS cm-1) does not penetrate the Si-C void structure resulting in less side reactions and higher initial coulombic efficiency compared to a liquid electrolyte (72.7 % vs. 31.0 %). Investigating the influence of balancing of full cells using 3-electrode ASSB cells revealed a higher delithiation of the cathode as a result of the higher cut-off voltage of the anode at high n/p ratios. During galvanostatic cycling, full cells with either a low or rather high overbalancing of the anode showed the highest capacity retention of up to 87.7 % after 50 cycles. 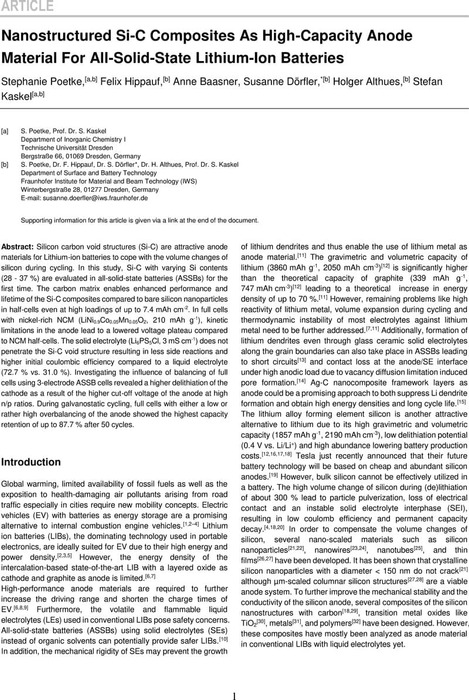 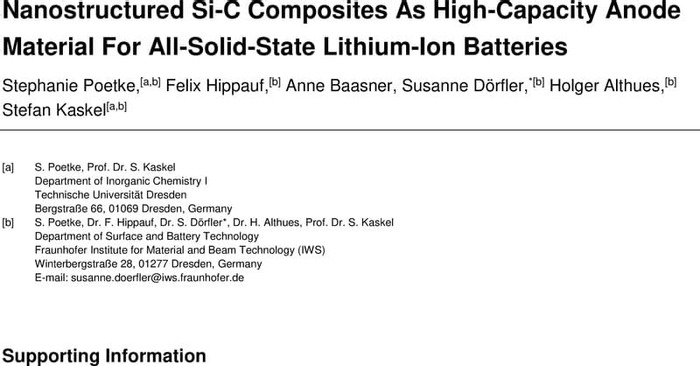 We are encoding your file so that it is compatible across browsers, depending on file size and type this may take some time.
SI ASSB Si-C