Molecular photoswitches use light to interconvert from a thermodynamically stable isomer into a meta-stable isomer. Chemists and materials scientists have applied photoswitches in photopharmacology, catalysis, and molecular solar thermal (MOST) materials. Visible-light-absorbing photoswitches are attractive because the relatively low-energy light minimizes undesired photochemical reactions and enables biological applications. Designing ideal photoswitches requires long-lived metastable states; predicting their half-lives with theory is difficult because it requires locating transition structures. We now report the EZ-TS code, which automates the prediction of rate constants for the thermal Z → E isomerization. We leverage EZ-TS to automate the location of the favored transition structure and to comprehensively benchmark the performance of 140 model chemistries against the experimental rate constants of 11 azoarenes. We used 28 density functionals [local spin density approximation, generalized gradient approximation, meta-GGA, hybrid GGA, hybrid meta-GGA], and five basis sets [6-31G(d), 6-31+G(d,p), 6-311+G(d,p), cc-pvdz, and aug-cc-pvdz]. The hybrid GGA functionals performed the best of all tested functional classes. We demonstrate that the mean absolute errors of 14 model chemistries approach chemical accuracy, and mPWPW91/6-31+G(d,p) achieves chemical accuracy and should be used with EZ-TS.

This is the first submission to an ACS Journal. 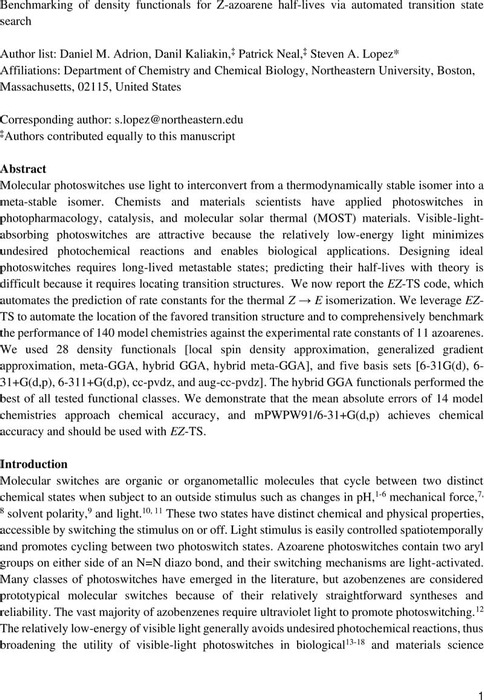 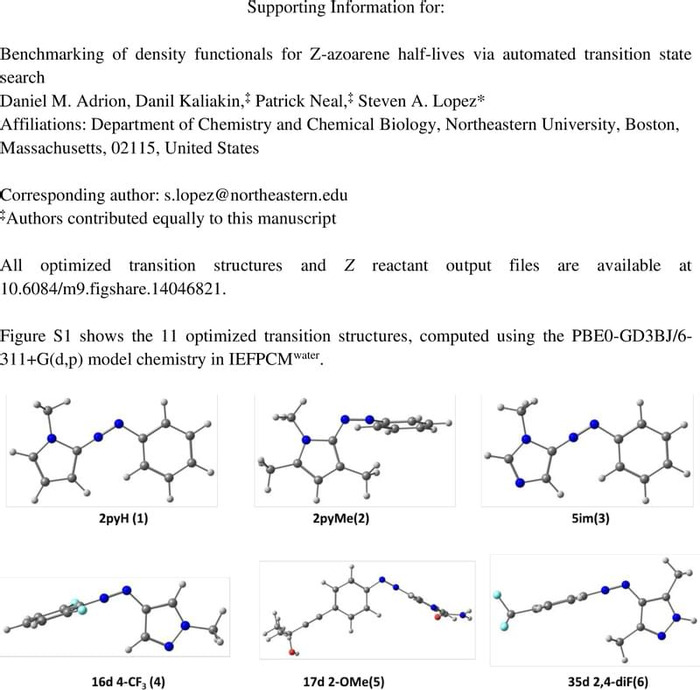 We are encoding your file so that it is compatible across browsers, depending on file size and type this may take some time.
Azoarene benchmarking supporting information