A key aim of biocatalysis is to mimic the ability of eukaryotic cells to carry out compartmentalized multistep cascades in a controlled and selective way. As biocatalytic cascades get longer and more complex, reactions become unattainable under typical batch conditions. Here a continuous flow multipoint injection reactor was combined with switching valves to overcome batch incompatibility, thus allowing for successful biocatalytic reaction cascades. As proof-of-principle, several reactive carbonyl intermediates were generated in situ using galactose oxidase and engineered choline oxidases, then passed directly to a series of packed-bed modules containing different aminating biocatalysts which accordingly produced a range of structurally distinct amines. The method was expanded to employ a batch incompatible sequential amination cascade via an oxidase-transaminase-imine reductase sequence, introducing different amine reagents at each step without cross reactivity. The combined approaches allowed for the biocatalytic synthesis of the natural product alkaloid precursor 4O-methylnorbelladine. The flow biocatalysis platform shown here significantly increases the scope of novel biocatalytic cascades, removing previous limitations due to reaction and reagent batch incompatibility. 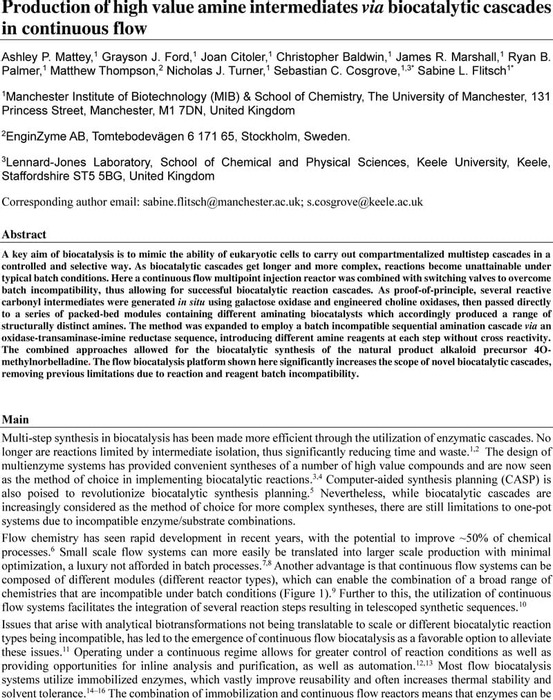 We are encoding your file so that it is compatible across browsers, depending on file size and type this may take some time.
ChemRxiv upload