Organophosphorus (OP) compounds are among the most toxic of chemical substances and widely used as insecticides, pesticides, and chemical warfare agents. The most important enzyme inhibited by OP compounds is acetylcholinesterase (AChe). Inactivation of AChe function results in the accumulation of neurotransmitter, leading to death due to serious respiratory disorders. Organophosphorus hydrolase (OPH), also called phosphotriesterase, is a homo-dimeric metalloenzyme that can hydrolyze various OP agents in the circulatory system, resulting in products that are generally of reduced toxicity. The best OPH substrate found to date is the insecticide diethyl p-nitrophenyl phosphate (paraoxon). Most structural and kinetic studies assume that the binding orientation of paraoxon is identical to that of diethyl 4-methylbenzylphosphonate, which is the only substrate analog co-crystallized with OPH. In the current work, we used a combined docking and molecular dynamics (MD) approach to predict the likely binding mode of paraoxon in the OPH active site. We identified a potential binding mode of paraoxon that does not match the binding mode of diethyl 4-methylbenzylphosphonate. Then, we used the predicted binding mode to run MD simulations on the wild type (WT) OPH complexed with paraoxon, and OPH mutants complexed with paraoxon. Additionally, we identified 3 hot-spot residues (D253, H254, and I255) involved in the stability of the OPH active site. To further assess these predictions, we then experimentally assayed single and double mutants involving these residues (D253E, H254S, I255S, D253E-H254R and D253E-I255G) for hydrolytic activity against paraoxon. Computational structural analysis of protein-substrate dynamics shows different hydrogen bonding profiles for mutants involving D253 (D253E, D253E-H254R, and D253E-I255G) compared to WT OPH. Additionally, the binding free energy calculations and the experimental kinetics (particularly, kcat and KM) of the reactions between each OPH mutant and paraoxon show that mutated forms D253E, D253E-H254R, and D253E-I255G exhibit enhanced activity over WT OPH. Interestingly, our experimental results show that the activity of the double mutant D253E-H254R increased by 19-fold compared to WT OPH. 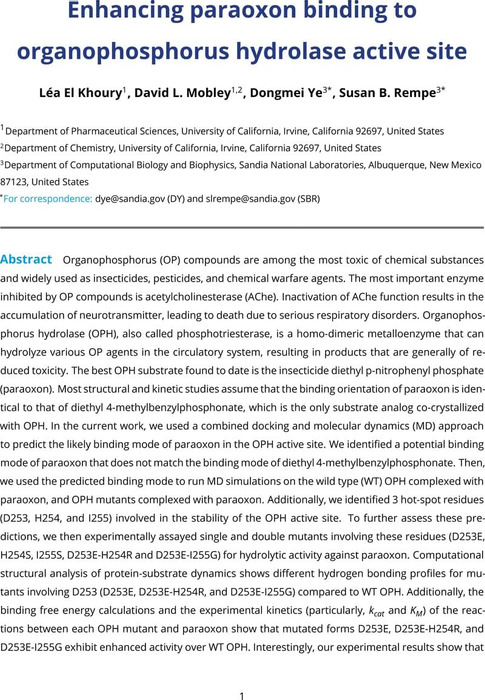 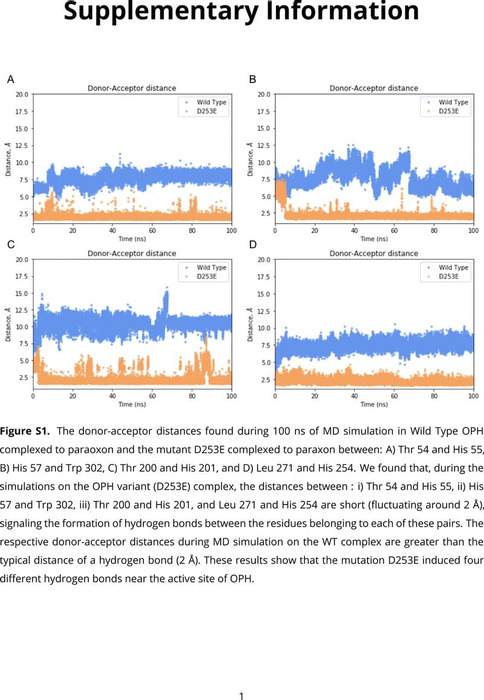 We are encoding your file so that it is compatible across browsers, depending on file size and type this may take some time.
OPH-SI-v0.1

Sandia National Laboratories (SNL) is a multi-mission laboratory managed and operated by National Technology & Engineering Solutions of Sandia, LLC, a wholly owned subsidiary of Honeywell International Inc., for the U.S. Department of Energy’s National Nuclear Security Administration under contract DE-NA0003525. This work was supported by Sandia's LDRD program. This work was performed, in part, at the Center for Integrated Nanotechnologies (CINT), an Office of Science User Facility operated for the U.S. DOE's Office of Science by Los Alamos National Laboratory (Contract DE-AC52-06NA25296) and SNL. The views expressed in the article do not necessarily represent the views of the U.S. Department of Energy or the United States Government.
DLM appreciates the financial support of the National Institutes of Health (R01GM108889)
We appreciate NVIDIA Corporation for the donation of hardware on which part of this work was conducted. We acknowledge OpenEye Scientific Software for licensing the pieces of software used in this work.

David Mobley serves on the advisory board of OpenEye Scientific Software and is an Open Science Fellow with Silicon Therapeutics.