Wildfires produce large amounts of pyrogenic carbon (PyC), including particulate charcoal, known for its chemical recalcitrance and sorption affinity for organic molecules. Wildfire-derived PyC is highly mobile in the landscape and can be transported to fluvial networks where it may impact natural dissolved organic matter (DOM) and microbial biofilms. The effects of PyC on freshwater ecosystems and carbon cycling therein remain poorly investigated. To address this research gap, we used in-stream flumes with a control vs treatment design (pulse addition of PyC particles). We present evidence that field-aged PyC inputs into river ecosystems can alter dissolved organic carbon (DOC) concentration, DOM composition, pH, and enzymatic activities in benthic biofilms. In stream DOM composition was altered due to leaching of pyrogenic DOM from PyC and possible concurrent sorption of riverine DOM to PyC. DOM changes and increase in pH were associated with changes in enzymatic activities, which reflected preferential usageof recalcitrant over easily available DOM by biofilms. Furthermore, we observed particulate PyC sedimentation on biofilm surfaces, which may further modulate the impacts of PyC. This study highlights the importance of PyC for in-stream DOM propertiesand biofilm functioning with implications for in-stream biogeochemical cycling in fire affected watersheds. 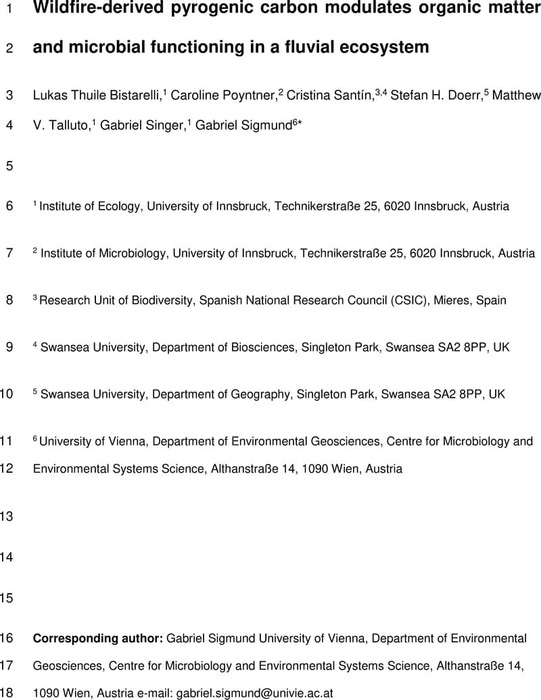 download asset 210203_limnic_fires_pre_print.pdf 0.54 MB [opens in a new tab] cloud_download
pdf : 0.54 MB
We are encoding your file so that it is compatible across browsers, depending on file size and type this may take some time. 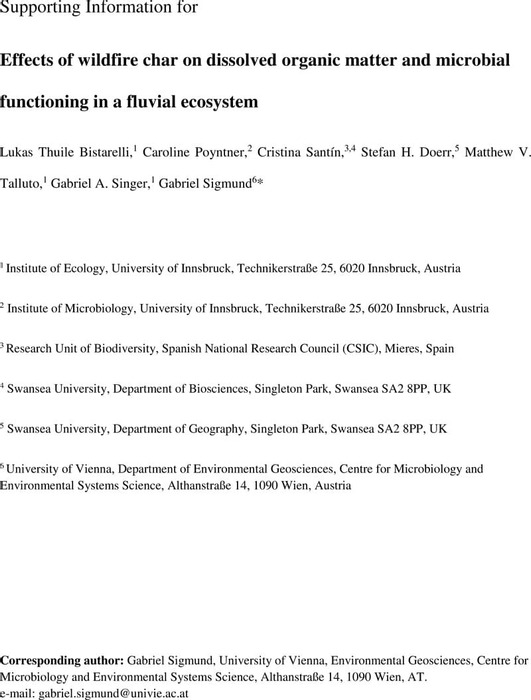 download asset 210202_limnic_fires_SI.pdf 0.85 MB [opens in a new tab] cloud_download
pdf : 0.85 MB
We are encoding your file so that it is compatible across browsers, depending on file size and type this may take some time.
210202 limnic fires SI

no conflicts to declare