Pd-catalyzed nucleophilic fluorination reactions are important methods for the synthesis of fluoroarenes and fluoroalkenes. However, these reactions can generate a mixture of regioisomeric products that are often difficult to separate. While investigating the Pd- catalyzed fluorination of cyclic vinyl triflates, we observed that the addition of a substoichiometric quantity of TESCF3 significantly improves both the efficiency and the regioselectivity of the fluorination process. Herein, we report a combined experimental and computational study on the mechanism of this transformation focused on the role of TESCF3. We found that in the absence of additives such as TESCF3, the transmetalation step produces predominantly the thermodynamically more stable trans isomer of the key LPd(vinyl)F complex (L = biaryl monophosphine ligand). This intermediate, rather than undergoing reductive elimination, preferentially reacts through an intramolecular β-deprotonation to form a Pd-cyclohexyne intermediate. This undesired reactivity is responsible for the low efficiency (11% yield) and poor regioselectivity (1.8:1) of the catalytic reaction. When TESCF3 is added to the reaction mixture, the cis-LPd(vinyl)F complex is instead formed, through a pathway involving an unusual dearomatization of the ligand by nucleophilic attack from a trifluoromethyl anion (CF3–). In contrast to the trans isomer, this cis-LPd(vinyl)F complex readily undergoes reductive elimination to provide the vinyl fluoride product with desired regioselectivity, without the generation of Pd-cyclohexyne intermediates. 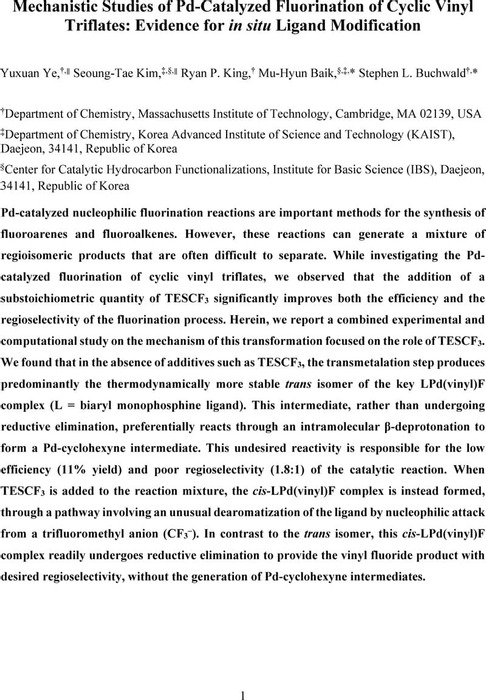 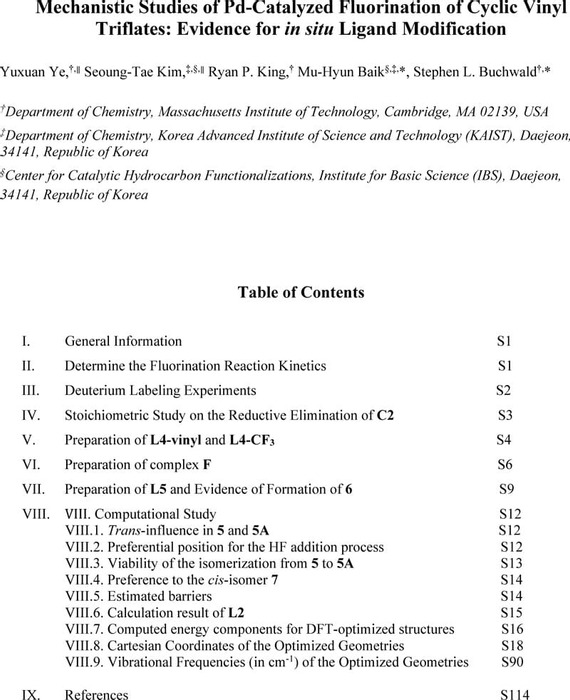 We are encoding your file so that it is compatible across browsers, depending on file size and type this may take some time.
Supporting Information-pdf