Lyotropic liquid crystals are fluids with macroscopic anisotropic structures formed by the self-assembly of nonspherically-symmetric mesogenic molecules or nanoparticles. Here, lyotropic liquid crystalline phases with discotic-nematic orderings were observed in colloidal dispersions of hexagonal-shaped nanoplatelets of two-dimensional layered hybrid organic-inorganic metal halide perovskites (with formula A2BX4 where A1+ is an organic ammonium cation, B2+ is a divalent metal cation, and X1- is a halide anion) synthesized via microcrystallization by mixing precursor solutions with antisolvents containing surfactants, which showed semiconducting properties such as blue to green photoluminescence. As nanocrystalline perovskites are compositionally (transition metals like manganese, copper or europium as octahedral unit centers, mixed halides, organic spacers with chirality, etc.), microscopic structurally (three-, two-, or one-dimensional), and geometrically (nanosheets or nanorods) adjustable, liquid crystals with different phase behaviors and physical features (e.g., paramagnetism) may be systematically developed using this method. 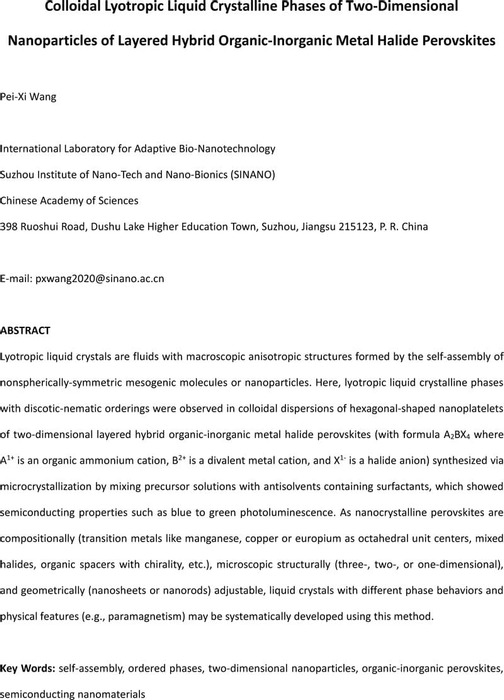 The author declares no conflicts of interest.