Efficient, Green, and Renewable N-Di-Methylation Synthesis of Amines by a Novel Nano-Catalyst of [email protected]

The development of Earth-abundant reusable and no-toxic heterogeneous catalyst applied in the pharmaceutically, bio-active relevant compounds synthesis as well as other organic syntheses still remains as the most important goal of the general chemical research. N-methylated compounds, as one of the most essential bioactive compounds, have been widely used in the fine and bulk industries for the production of high-value chemicals including pharmaceuticals, agrochemicals, and dyes. As their reports, activated toxic methyl iodide and dimethyl sulfoxide were usually employed in the traditional N-methylation, which easily suffer from narrow scopes of amines, generation of by-products, and a large amount of waste. Very recently, transition metal-catalyzed methylation of amines has become an efficient, practical, and cost-effective method for the one-pot selective synthesis of N-methylamines with C1 sources. Herein, we first developed a simple and environmentally friendly method for the preparation of efficient, reusable, and low-cost graphene spheres encapsulated Ni/NiO nanoalloy catalysts (Ni/[email protected]) for highly selective synthesis of the N-methylated compounds by using various functional amines and aldehydes under easily handle-able and industrially applicable conditions. A large number of primary, secondary amines (more than 70 examples) could be converted smoothly to the corresponding N, N-dimethylamines with the participation of different functional aldehydes. The gram-scale synthesis was also demonstrated in an excellent yield; not only that, the catalyst was further proved that it could be easily recycled by its intrinsic magnetism and reused up to ten times without losing activity and selectivity. Both of them are the great advantages in contrast to other catalysts reported previously. And also, for the first time, we have developed the highly efficient, cost-effective tandem synthesis of N, N-dimethylamines products in a one-pot process by means of aldehydes and NH3. As far as we know, this is the first example of the synthesis of tertiary amines with the combined reaction process of reductive amination of aldehydes and N-methylation of primary amines only with the single one earth-abundant metal catalyst. Overall, the advantages of this newly developed method including operational simplicity, high stability, easily recyclable, cost-effective of the catalyst, and good functional group compatibility for the synthesis of N-methylation products, as well as the highly efficient and industrial applicable tandem synthesis process. 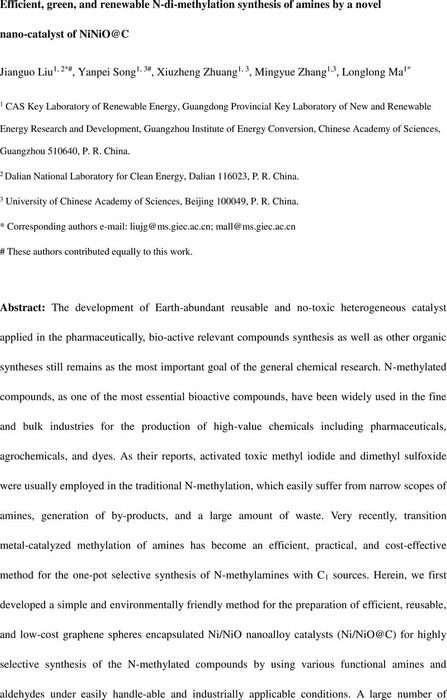