Food authenticity and safety are major public concerns due to the increasing number of food fraud cases. Meat fraud is an economically motivated practice of covertly replacing one type of meat with a cheaper alternative, raising health, safety, and ethical concerns for consumers. In this study, we implement the MasSpec Pen technology for rapid and direct meat analysis and authentication. The MasSpec Pen is an easy-to-use handheld device connected to a mass spectrometer that employs a solvent droplet for gentle chemical analysis of samples. Here, MasSpec Pen analysis was performed directly on several meat types including grain-fed beef, grass-fed beef, venison, cod, halibut, Atlantic salmon, sockeye salmon, and steelhead trout, with a total analysis time of 15 seconds per sample. Statistical models developed with the Lasso method using a training set of samples yielded per-sample accuracies of 95% for the beef model, 100% for the beef versus venison model, and 84% for the multiclass fish model. Metabolic predictors of meat type selected included several metabolites previously described reported in the skeletal muscles of animals, including carnosine, anserine, succinic acid, xanthine and taurine. When testing the models on independent test sets of samples, per-sample accuracies of 100% were achieved for all models, demonstrating the robustness of our method for unadulterated meat authentication. MasSpec Pen feasibility testing for classifying venison and grass-fed beef samples adulterated with grain-fed beef achieved per-sample prediction accuracies of 100% for both classifiers using test sets of samples. Altogether, the results obtained in this study provide compelling evidence that the MasSpec Pen technology is as a promising alternative analytical method for the investigation of meat fraud. 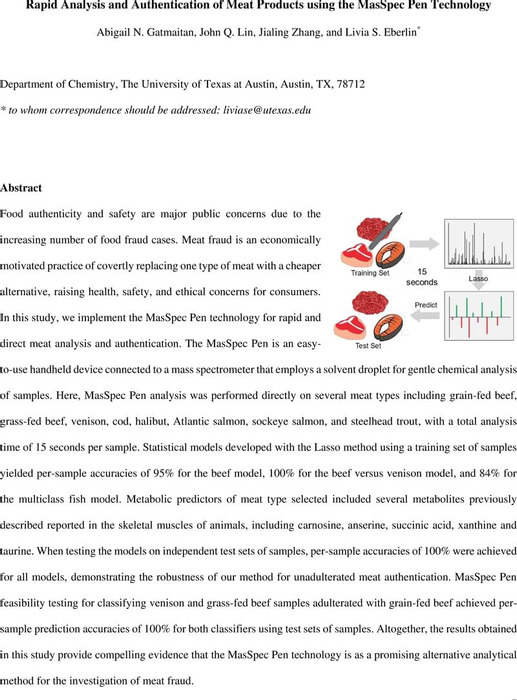