Minor structural modifications to the DNA and RNA nucleobases have a significant effect on their excited state dynamics and electronic relaxation pathways. In this study, the excited state dynamics of 7-deazaguanosine and guanosine 5’-monophosphate are investigated in aqueous and in a mixture of methanol and water using femtosecond broadband transient absorption spectroscopy following excitation at 267 nm. The transient spectra are collected using photon densities that ensure no parasitic multiphoton-induced signal from solvated electrons. The data can be fit satisfactorily using a two- or three-component kinetic model. By analyzing the results from steady-state, time-resolved, computational calculations, and the methanol-water mixture, the following general relaxation mechanism is proposed for both molecules, Lb ® La ® 1ps*(ICT) ® S0, where the 1ps*(ICT) stands for an intramolecular charge transfer excited singlet state with significant ps* character. In general, longer lifetimes for internal conversion are obtained for 7-deazaguanosine compared to guanosine 5’-monophosphate. Internal conversion of the 1ps*(ICT) state to the ground state occurs on a similar time scale of a few picoseconds in both molecules. Collectively, the results demonstrate that substitution of a single nitrogen for a methine (C-H) group at position seven of the guanine moiety stabilizes the 1pp* Lb and La states and alter the topology of their potential energy surfaces in such a way that the relaxation dynamics in 7-deazaguanosine are slowed down compared to those in guanosine 5’-monophosphate but not for the internal conversion of 1ps*(ICT) state to the ground state. 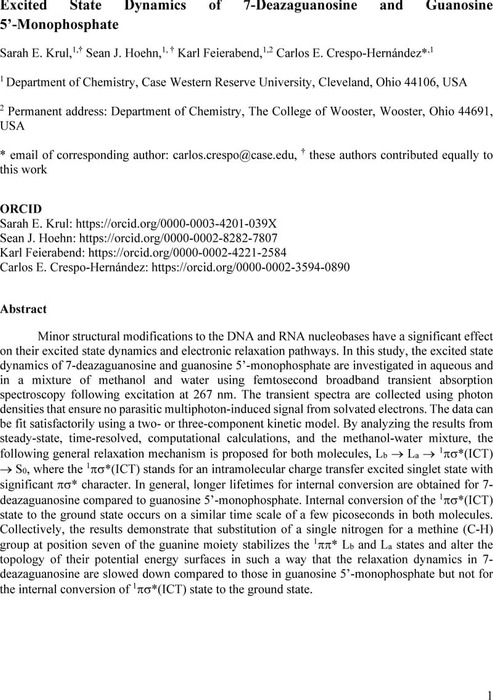 download asset Krul_SE MS_01-07-2021_revised.pdf 0.95 MB [opens in a new tab] cloud_download
pdf : 0.95 MB
We are encoding your file so that it is compatible across browsers, depending on file size and type this may take some time.

No conflict of interests.