Bioenergetics played critical roles for the chemical emergence of life where available energy resources drove the generation of primitive polymers and fueled early metabolism. Further, apart from information storage, the catalytic roles of primitive nucleic acid fragments have also been argued to be important for biopolymer evolution. Herein, we have demonstrated the non-equilibrium generation of catalytic supramolecular polymers of a possible proto-RNA building block (melamine) driven by a thermodynamically activated ester of low molecular weight. We utilized reversible covalent linkage to install a catalytic imidazole moiety in the polymer backbone. This resulted in energy dissipation via hydrolysis of the substrate predominantly from the assembled state and subsequent disassembly, thus installing kinetic asymmetry in the energy consumption cycle. Non-catalytic analogues led to kinetically stable polymers while inactivated substrates were unable to drive the polymerization. The non-equilibrium polymers of the pre-RNA bases were capable to spatiotemporally bind to a model cofactor. Notably, presence of an exogenous aromatic base augmented the stability of the polymers, reminiscent to what the molecular midwives did during early evolution. 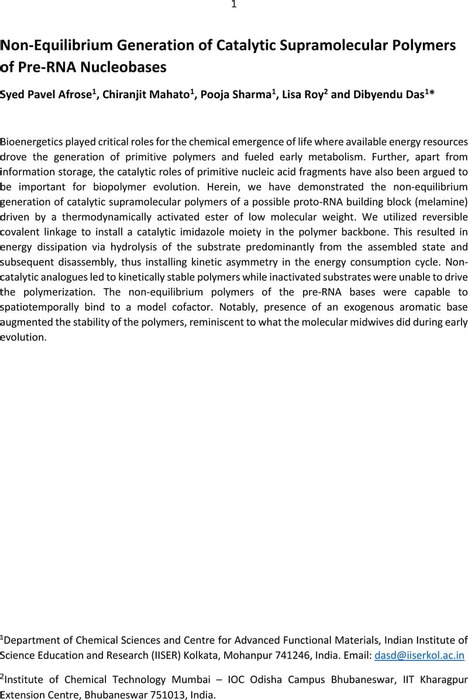 download asset Manuscript - Das.pdf 1 MB [opens in a new tab] cloud_download
pdf : 1 MB
We are encoding your file so that it is compatible across browsers, depending on file size and type this may take some time.

download asset Manuscript.docx 9 MB [opens in a new tab] cloud_download
docx : 9 MB
We are encoding your file so that it is compatible across browsers, depending on file size and type this may take some time.
Manuscript

Authors declare no conflict of interest