Exploring electrocatalyst with high activity, selectivity and stability is essential for development of applicable electrocatalytic ammonia synthesis technology. By performing density functional theory calculations, we systematically investigated a series of transition-metal doped Au-based single atom alloys (SAAs) as promising electrocatalysts for nitrogen reduction reaction (NRR). For Au-based electrocatalyst, the first hydrogenation step (*N2→*NNH) normally determines the limiting potential of the overall reaction process. Compared with pristine Au(111) surface, introducing single atom can significantly enhance the binding strength of N2, leading to decreased energy barrier of the key step, i.e., ΔG(*N2→*NNH). According to simulation results, three descriptors were proposed to describe ΔG(*N2→*NNH), including ΔG(*NNH), d-band center, and . Eight doped elements (Ti, V, Nb, Ru, Ta, Os, W, and Mo) were initially screened out with limiting potential ranging from -0.75V to -0.30 V. Particularly, Mo- and W-doped systems possess the best activity with limiting potentials of -0.30 V, respectively. Then the intrinsic relationship between structure and the potential performance was further analyzed by using machine-learning. The selectivity, feasibility, stability of these candidates were also evaluated, confirming that SAA containing Mo, Ru ,Ta, and W could be outstanding NRR electrocatalysts. This work not only broadens the understating of SAA application in electrocatalysis, but also devotes to the discovery of novel NRR electrocatalysts. 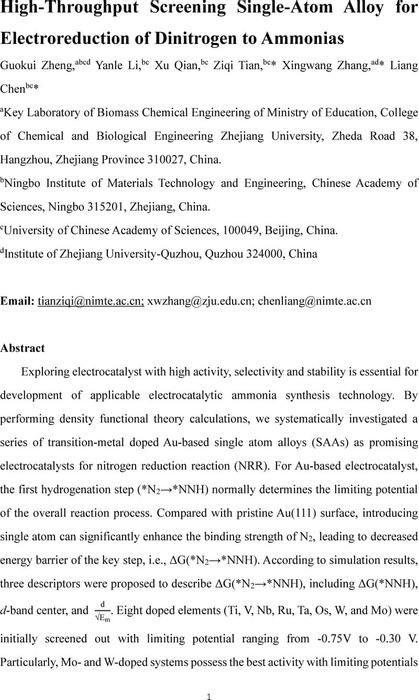 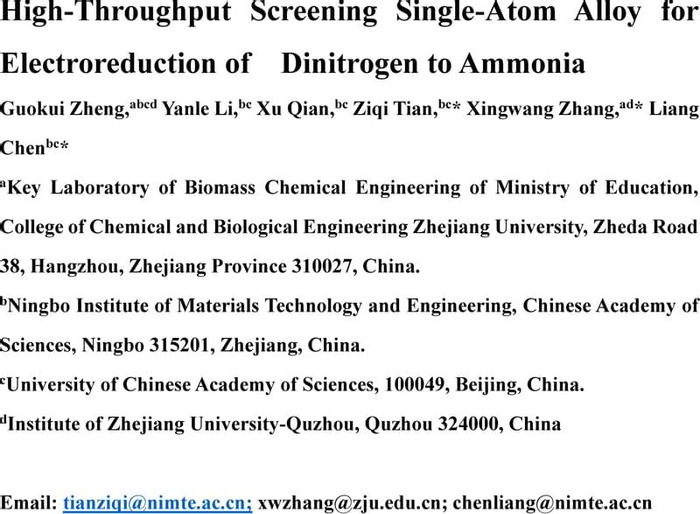 We are encoding your file so that it is compatible across browsers, depending on file size and type this may take some time.
Supporting information Chemrxiv