Classical antibody functions include opsonization, complement activation, and enhancement of cellular antimicrobial function. Antibodies can also have catalytic activity, although the contribution of catalysis to their biological functions has been more difficult to establish. With the ubiquity of catalytic antibodies against glycans virtually unknown, we sought to advance this knowledge. The use of a glycan microarray allowed epitope mapping of several monoclonal antibodies (mAbs) against the capsule of Cryptococcus neoformans. From this, we designed and synthesized two glycan based Förster Resonance Energy Transfer (FRET) probes, which we used to discover antibodies with innate glycosidase activity and analyse their enzyme kinetics, including mAb 2H1, a polysaccharide lyase, and the most efficient glycosidase to date. The validity of the FRET assay was confirmed by demonstrating that the mAbs mediate glycosidase activity on intact cryptococcal capsules, as observed by a reduction in capsule diameter. Further the mAb 18B7, a glycosidase hydrolase, resulted in the appearance of reducing ends in the capsule as labelled by hydroxylamine-armed fluorescent (HAAF) probe. Finally, we demonstrate that exposing C. neoformans cells to catalytic antibodies results in changes in complement deposition and increased phagocytosis by macrophages — suggesting the anti-phagocytic properties of the capsule have been impaired. Our results raise questions over the ubiquity of antibodies with catalytic activity against glycans and establish the utility of glycan-based FRET and HAAF probes as tools for investigating this activity. 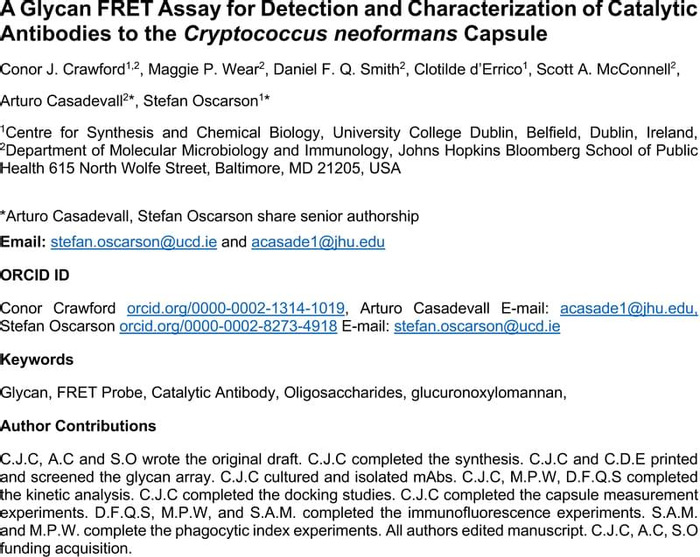