Experimental studies and theoretical models presently disagree on methane adsorption energetics on carbon materials that include crystalline graphene-like structures to amorphous materials with or without significant edge structure. However, this information is critical for the rational design and optimization of the structure and composition of adsorbents for natural gas storage. The delicate nature of the interactions inherent to methane physisorption, such as dispersion interactions, polarization of both the adsorbent and the adsorbate, interplay between H- bonding and tetrel bonding, and induced dipole/Coulomb interactions, requires computational treatment at the highest possible level of theory while remaining non-prohibitive in terms of computational cost. In this study, we employ the smallest reasonable computational model, a maquette, of porous carbon surfaces with a central atomic binding site for substitution. The most accurate predictions of the methane adsorption energetics were achieved by electron-correlated molecular orbital theory (CCSD(T)) and hybrid density functional theory (MN15) calculations, both employing a saturated all-electron basis set. The characteristic geometry of methane adsorption on a carbon surface was likened to a “lander” position over the ring centers of the adsorbent. This adsorbate/adsorbent arrangement arises due to bonding interactions of the adsorbent π-system with the proximal H–C bonds of methane, in addition to tetrel bonding between the antibonding orbital of the distal C–H bond and the central atom of the maquette (C, B, or N). The polarization of the electron density as well as structural deformations in both the adsorbate and adsorbent molecules clearly indicate a ~3 kJ mol-1 preference for methane binding on the N-substituted maquette. In this study, the B-substituted maquette showed a comparable or lower binding energy than the unsubstituted, pure C model, depending on the level of theory employed. The calculated thermodynamic results indicate an unambiguous guiding strategy toward incorporating electron- enriched substitutions (e.g., N) in carbon materials as a way to increase methane storage capacity over electron deficient (e.g., B) modifications. The thermochemical calculation methodologies were critically evaluated in order to establish a conceptual agreement between the experimental isosteric heat of adsorption and the binding enthalpies/free energies from statistical thermodynamics principles. 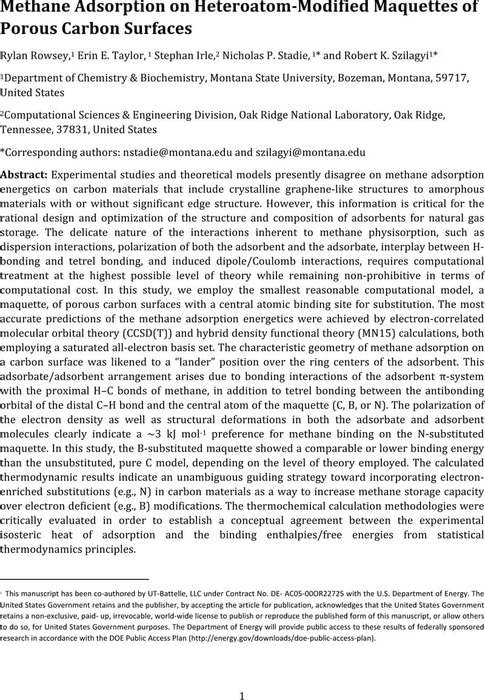 Authors declare no conflict of interest.