Aggregation-induced emission (AIE) has proven to be a viable strategy to achieve highly efficient RTP in bulk by restricting molecular motions. Here we show that by utilizing triphenylamine (TPA) as an electronic donor which connects to an acceptor via an sp3 linker, six TPA-based AIE-active RTP luminophores were obtained. Both the TPA AIE-gen and the sp3-linkage can suppress aggregation-caused quenching. Consequently, dual phosphorescence bands emitting from localized donor and acceptor triplet states, respectively, could be recorded at lowered temperatures; at room temperature, only a single RTP band corresponding to the lowest triplet state is present, presumably due to thermally assisted electronic coupling between the two states. The reported molecular construct serves as an “intermediary case” between a fully conjugated donor-acceptor system and a do-nor/acceptor binary mix, which may provide important clues on the design and control of molecular systems with complex excited-state dynamics. 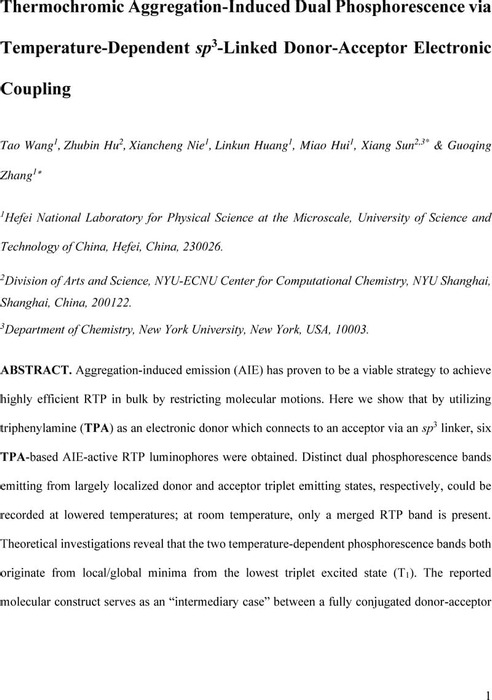 We are encoding your file so that it is compatible across browsers, depending on file size and type this may take some time.
WT SI

There is no conflict of interest to declare