Chromophores that absorb in the tissue-penetrant far-red/near-infrared window have long served as photocatalysts for the generation of singlet oxygen for photodynamic therapy. However, the cytotoxicity and side-reactions associated with singlet oxygen sensitization have posed a problem for using long wavelength photocatalysis to initiate other types of chemical reactions in biological environments. Described here is the use of Si-Rhodamine (SiR) dyes as photocatalysts for inducing rapid bioorthogonal chemistry using 660 nm light through the oxidation of a dihydrotetrazine to a tetrazine in the presence of trans-cyclooctene dienophiles. SiRs have been commonly used as fluorophores for applications in biology, but have not previously been applied to catalyze chemical reactions. A dihydrotetrazine/tetrazine pair is described that displays high stability in both oxidation states. A series of SiR derivatives were evaluated, and the Janelia-SiR dyes were found to be especially effective in catalyzing rapid photooxidation at low catalyst loadings (typically 1 µM). A protein that was site-selectively modified by trans-cyclooctene was quantitively conjugated upon exposure to 660 nm light and a dihydrotetrazine. By contrast, a previously described methylene blue catalyst was found to rapidly degrade the protein. SiR-red light photocatalysis was used to crosslink hyaluronic acid derivatives that were functionalized by dihydrotetrazine and trans-cyclooctenes, enabling 3D culture of human prostate cancer cells. This photoinducible hydrogel formation could also be carried out in vivo in live mice through subcutaneous injection of a solution containing SiR photocatalyst and a Cy7-labeled hydrogel precursor, followed by brief in vivo irradiation with 660 nm light to produce a stable hydrogel material. This cytocompatible method for using red light photocatalysis to activate bioorthogonal chemistry is anticipated to find broad applications where spatiotemporal control is needed in the in vivo environment. 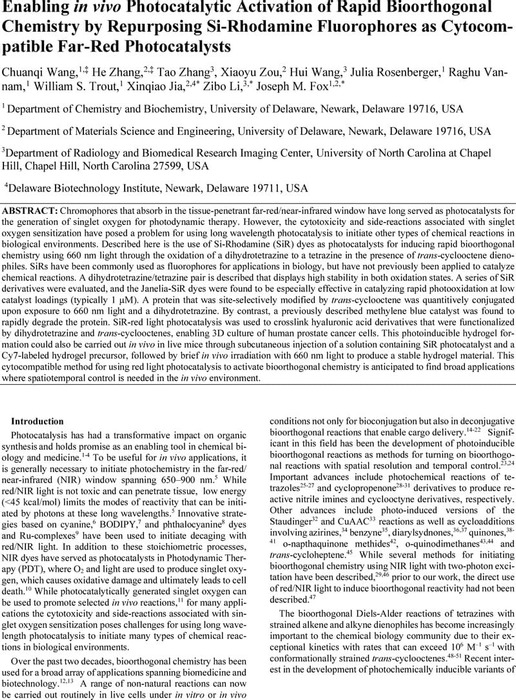 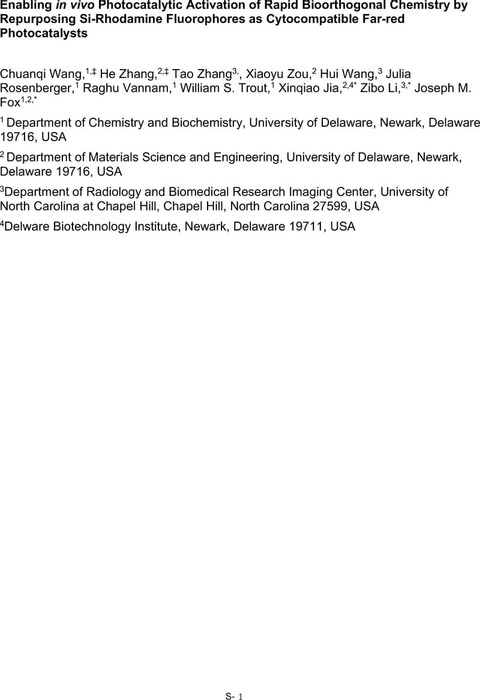 We are encoding your file so that it is compatible across browsers, depending on file size and type this may take some time.
SiR SI dec31 combined