We developed a methodological workflow combining size exclusion chromatography, native isoelectric focusing, and high sensitivity X-ray-based metal detection within electrophoresis gels to analyze the metal content of single proteins purified from minimal amounts (<20 mg) of post-mortem human brain and spinal cord tissue. An important metalloprotein in the human central nervous system is copper-zinc superoxide dismutase (SOD1), an antioxidant enzyme linked to the aetiology of both amyotrophic lateral sclerosis and Parkinson’s disease. Abnormal SOD1 metallation is suspected to play a role in the pathogenic aggregation of SOD1 in both disorders, although data describing SOD1 metal occupancy in human tissues has not previously been reported. Validating our novel approach we demonstrated step-by-step metal preservation, preserved SOD1 activity, and substantial enrichment of SOD1 protein vs confounding metalloproteins. We found Cu and Zn were bound to SOD1 in a ratio of 1.12 ± 0.28 in human central nervous system tissues from healthy individuals, a ratio close to the expected value of 1. Our methodological workflow can be adapted to study a range of metalloproteins from human tissues and other sources. 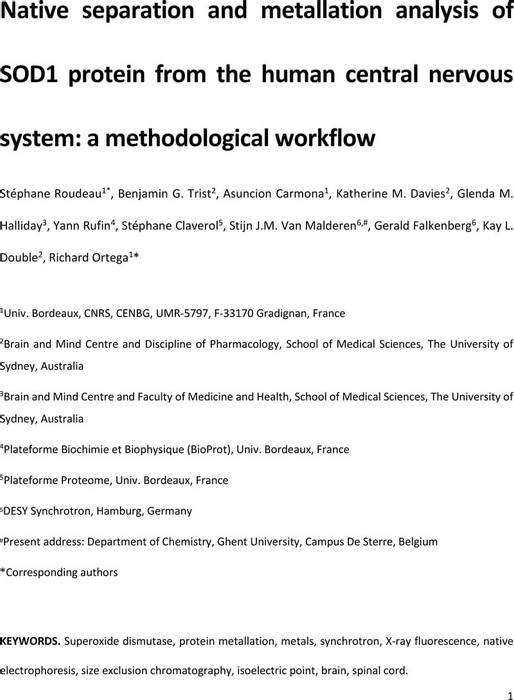