Hydrophobic blocks of amphiphilic block copolymers usually form glassy micellar cores with a rigid structure that limits their applications as nanocapsules for targeted delivery. We report here on the core/shell micelles with a soft core formed
by self-assembly of block copolymer composed of hydrophobic and polycation blocks, poly(lauryl acrylate)-block-poly(trimethylammonioethyl acrylate) (PLA-QPDMAEA), in aqueous solution. Using scattering, microscopy and spectroscopy techniques, we showed that such copolymer forms spherical and cylindrical core/shell micelles with a fluid-like PLA core and a positively charged shell, and that these micelles can encapsulate and release hydrophobic solutes. Moreover, we discovered novel vesicle-
like multicompartment structures containing both soft hydrophobic and interpolyelectrolyte (IPEC) layers formed by co-assembly of PLA-QPDMAEA core/shell micelles with another diblock copolymer composed of a hydrophilic block and polyanion block poly(ethylene oxide)-block-poly(methacrylic acid) (PEO-PMAA). These complex structures were characterized by small-angle neutron scattering, supported by self-consistent field modeling that confirmed the formation of vesicle-like structures with dense PEO core, IPEC inner layer, PLA soft layer, IPEC outer layer and loose PEO corona. Due to their unique tunable properties, such multicompartment micelles with fluid and IPEC layers and hydrophilic corona can be used as nanocapsules with controllable thickness of each layer, charge and stability. 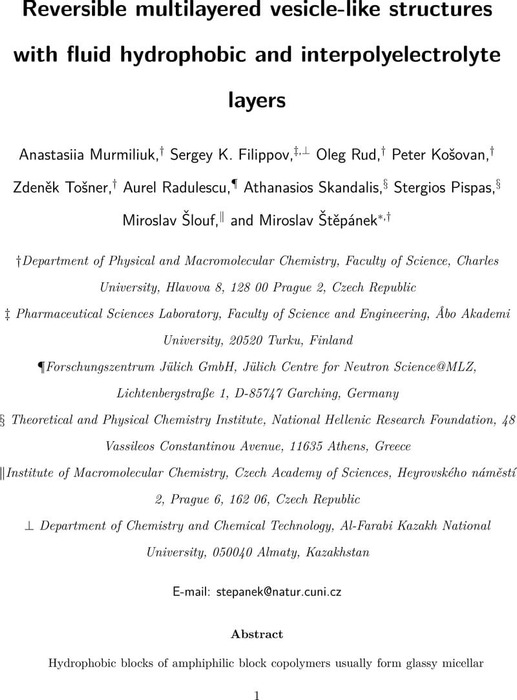 No conflicts to declare.