Single-atom catalysts (SACs) represent a new frontier in heterogeneous catalysis due to their remarkable catalytic properties and maximized atomic utilization. However, single atoms often bond to the support with polarized electron density and thus exhibit a high valence state, limiting their catalytic scopes in many chemical transformations. Here, we demonstrated that two-dimensional (2D) black phosphorus (BP) act as giant phosphorus (P) ligand to confine a high density of single atoms (eg, Pd1, Pt1) via atomic layer deposition. Unlike other 2D materials, BP with relatively low electronegativity and buckled structure favors the strong confinement of robust zero-valent palladium SACs in the vacancy site. Metallic Pd1/P SAC shows a highly selective semi-hydrogenation of phenylacetylene towards styrene, outperforming high-valence Pt1/P SAC, and also distinct from metallic Pd nanoparticles that facilitate the formation of fully hydrogenated products. Our DFT calculations reveal that Pd atom forms covalent-like bonding with adjacent P atoms, wherein H atoms tend to adsorb over electron-rich region for the subsequent hydrogenation. Zero-valent Pd in the confined space favors a larger energy gain for the synthesis of partially-hydrogenated product over the fully-hydrogenated one. Our work provides a new route towards the synthesis of zero-valent SACs on BP for a wide range of organic transformations. 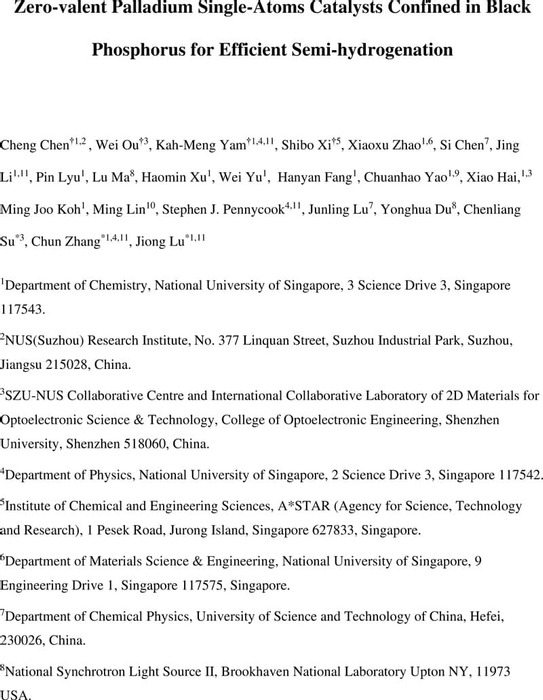