The ability to treat worst-case scenario, “black water” resulting from wildfire ash transport directly from hillslopes to source waters was investigated—this has not been reported previously. The treatment response capabilities of conventional chemical pre-treatment and high rate clarification processes were evaluated at bench scale; these included: sand-ballasted flocculation (SBF), SBF with enhanced coagulation, and SBF with powdered activated carbon (PAC).
Fresh ash was collected from the Thuya Lake Road (TLR) wildfire (+51.4098 latitude, -120.2435 longitude; burn area 556 ha), which was part of the Little Fort Fire Complex that burned in July 2017, near Little Fort, British Columbia, Canada. The ash was used to prepare a severely-deteriorated source water matrix. It was added to high quality river water (Elbow River, Calgary, Alberta) to reflect post-fire water quality conditions when ash is mobilized off the landscape to receiving waters during a major runoff event.

Prior to mixing, ash was sieved through a 1 mm screen to remove any large debris and conifer needles that typically would not be found in water treatment plant influent streams. Three concentrations of ash in river water were prepared (2.0, 10.0, and 20.0 g×L-1 of ash; five replicates of each) by adding ash to 1000 mL of Elbow River water in 2-L plastic square beakers, and mixed using a jar test apparatus (Phipps & Bird, PB-900 Series Programmable 6-Paddle Jar Tester, Richmond, VA) at 120 RPM for 2 minutes. Turbidity and dissolved organic carbon (DOC) concentrations consistent with or slightly higher than the levels that have been reported following severe wildfire (i.e., >1000 NTU and >15mg×L-1, respectively) were targeted. These water matrices were black-colored, in a manner consistent with previous reports of severely-deteriorated water conditions after wildfire. 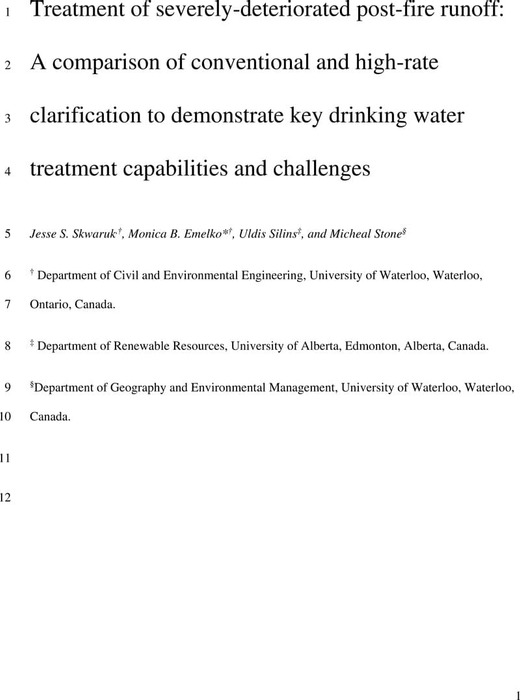 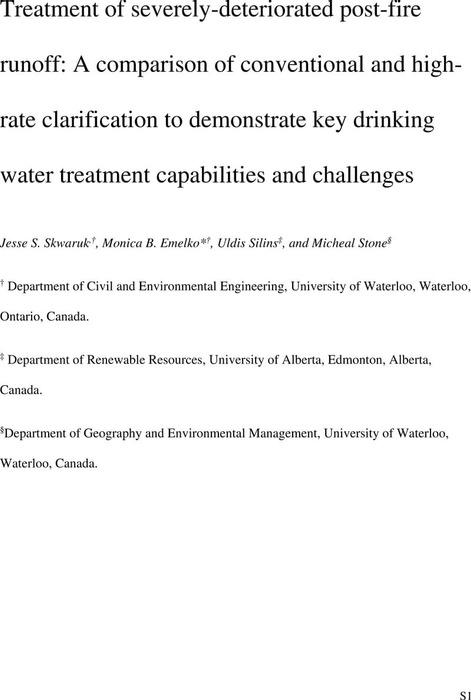 We are encoding your file so that it is compatible across browsers, depending on file size and type this may take some time.
2020 12 08 Skwaruk et al ChemRxiv Supporting Information