Intramolecular singlet fission (iSF) has shown potential to improve the power conversion efficiency in photovoltaic devices by promoting the splitting of a photon-absorbing singlet exciton into two triplet excitons within a single molecule. Among different possibilities, the donor-acceptor modular strategy of copolymers has shown great promise in its ability to undergo iSF under certain conditions. However, the number of iSF donor-acceptor copolymers reported in the literature remains remarkably narrow and clear trends for the molecular design of better candidates have not yet been established. In this work, we identify the trade-off between the main iSF requirements of the donor-acceptor strategy and formulate design rules that allow them to be tuned simultaneously in a fragment-based approach. Based on a library of 2944 donor-acceptor copolymers, we establish simple guidelines to build promising novel materials for iSF. These consist in (1st) selecting an acceptor core with high intrinsic singlet-triplet splitting, (2nd) locating a donor with a larger monomer frontier molecular orbital (FMO) gap than that of the acceptor, and (3rd) tuning the relative energy of donor and/or acceptor FMOs through functionalization to promote photoinduced charge transfer in the resulting polymer. Remarkably, systems containing benzothiadiazole and thiophehe-1,1-dioxide acceptors, which have been shown to undergo iSF, fulfill all criteria simultaneously when paired with appropriate donors. This is due to their particular electronic features, which make them highly promising candidates in the quest for iSF materials. 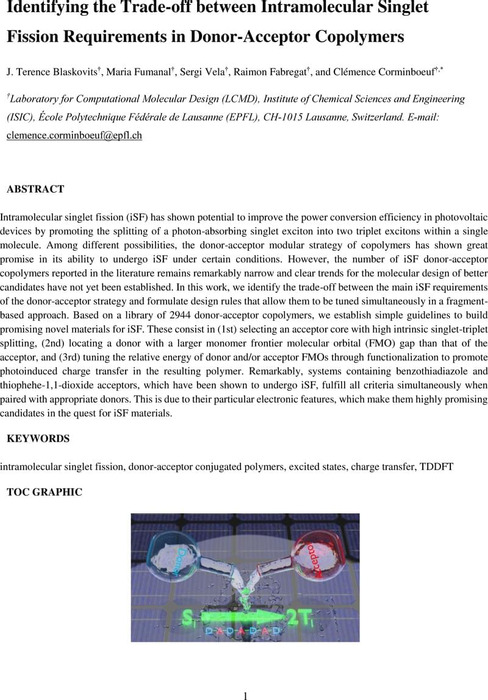 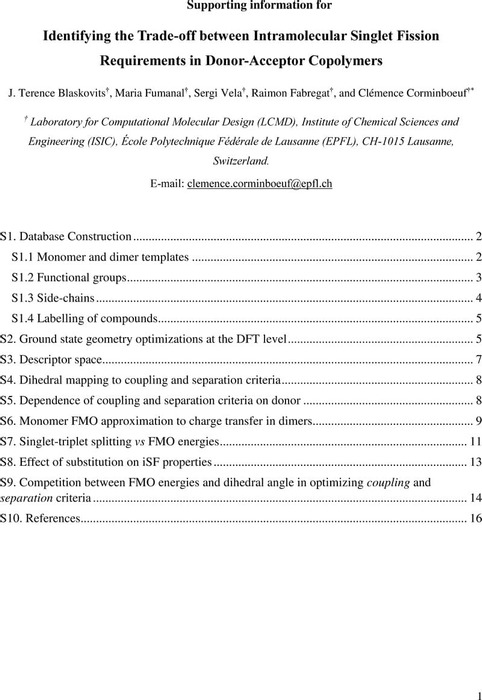 There are no conflicts of interest to declare.