Oxidation reactions are fundamental transformations in organic synthesis and chemical industry. With oxygen or air as terminal oxidant, aerobic oxidation catalysis provides the most sustainable and economic oxidation processes. Most aerobic oxidation catalysis employs redox metal as its active center. While nature provides non-redox metal strategy as in pyrroloquinoline quinone (PQQ)-dependent methanol dehydrogenases (MDH), such an effective chemical version is unknown. Inspired by the recently discovered rare earth metal-dependent enzyme Ln-MDH, here we show that an open-shell semi-quinone anionic radical species in complexing with lanthanum could serve as a very efficient aerobic oxidation catalyst under ambient conditions. In this catalyst, the lanthanum metal serves only as a Lewis acid promoter and the redox process occurs exclusively on the semiquinone ligand. The catalysis is initiated by 1e--reduction of lanthanum-activated ortho-quinone to a semiquinone-lanthanum complex La(SQ-.)2, which undergoes a coupled O-H/C-H dehydrogenation for aerobic oxidation of alcohols with up to 330 h-1 TOF. This study suggests a possible functional mode of semiquinone radicals, widely observed with quinoproteins in Nature. Moreover, this unique reductive activation strategy as well as the resulted radical anion as redox ligand creates a new turning point in the development of efficient aerobic oxidation catalysis. 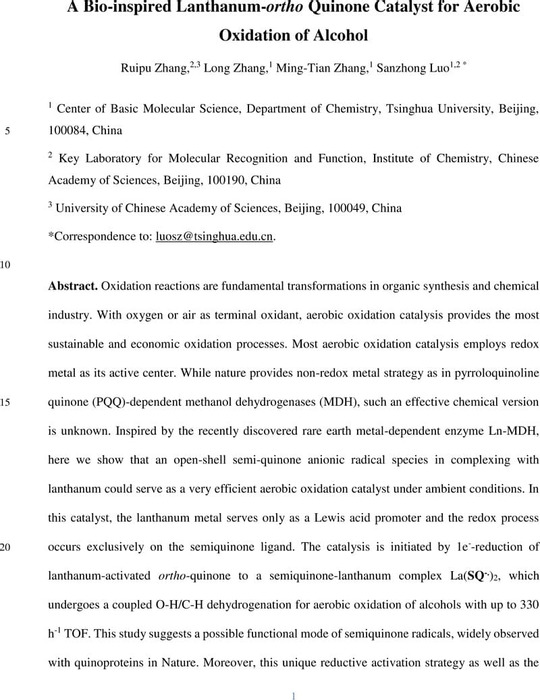 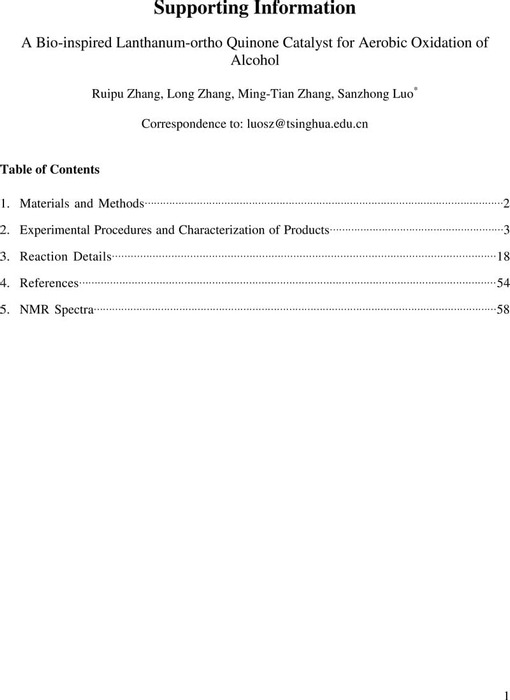 We are encoding your file so that it is compatible across browsers, depending on file size and type this may take some time.
ChemRexiv-SI-Nov29