Artificial neural network provides the possibility to develop molecular potentials with both the efficiency of the classical molecular mechanics and the accuracy of the quantum chemical methods. In this work, we developed ab initio based neural network potential (NN/MM-RESP-MBG) to perform molecular dynamics study for metalloproteins. The interaction energy, atomic forces, and atomic charges of metal binding group in NN/MM-RESP-MBG are described by a neural network potential trained with energies and forces generated from density functional calculations. Here, we used our recently proposed E-SOI-HDNN model to achieve the automatic construction of reference dataset of metalloproteins and the active learning of neural network potential functions. The predicted energies and atomic forces from the NN potential show excellent agreement with the quantum chemistry calculations. Using this approach, we can perform long time AIMD simulations and structure refinement MD simulation for metalloproteins. In 1 ns AIMD simulation of four common coordination mode of zinc-containing metalloproteins, the statistical average structure is in good agreement with statistic value of PDB Bank database. The neural network approach used in this study can be applied to construct potentials to metalloproteinase catalysis, ligand binding and other important biochemical processes and its salient features can shed light on the development of more accurate molecular potentials for metal ions in other biomacromolecule system. 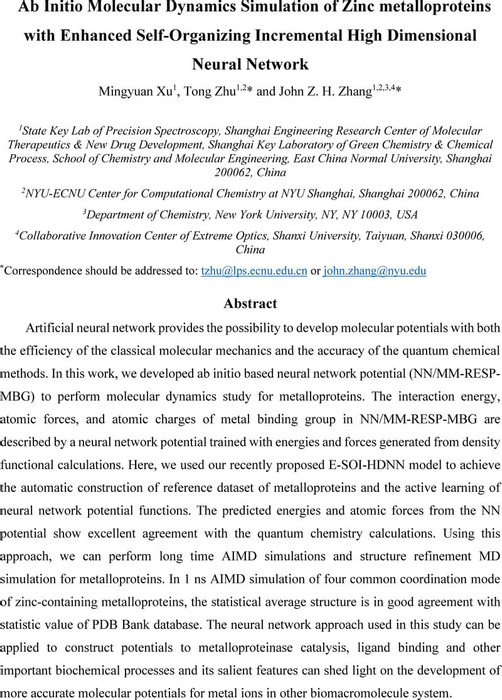