Identifying Molecules as Biosignatures with Assembly Theory and Mass Spectrometry

The search for evidence of life elsewhere in the universe is hard because it is not obvious what signatures are unique to life. Here we postulate that complex molecules found in high abundance are universal biosignatures as they cannot form by chance. To explore this, we developed the first intrinsic measure of molecular complexity that can be experimentally determined, and this is based upon a new approach called assembly theory which gives the molecular assembly number (MA) of a given molecule. MA allows us to compare the intrinsic complexity of molecules using the minimum number of steps required to construct the molecular graph starting from basic objects, and a probabilistic model shows how the probability of any given molecule forming randomly drops dramatically as its MA increases. To map chemical space, we calculated the MA of ca. 2.5 million compounds, and collected data which showed the complexity of a molecule can be experimentally determined by using three independent techniques including infra-red spectroscopy, nuclear magnetic resonance, and by fragmentation in a mass spectrometer, and this data has an excellent corelation with the values predicted from our assembly theory. We then set out to see if this approach could allow us to identify molecular biosignatures with a set of diverse samples from around the world, outer space, and the laboratory including prebiotic soups. The results show that there is a non-living to living threshold in MA complexity and the higher the MA for a given molecule, the more likely that it had to be produced by a biological process. This work demonstrates it is possible to use this approach to build a life detection instrument that could be deployed on missions to extra-terrestrial locations to detect biosignatures, map the extent of life on Earth, and be used as a molecular complexity scale to quantify the constraints needed to direct prebiotically plausible processes in the laboratory. Such an approach is vital if we are going to find new life elsewhere in the universe or create de-novo life in the lab. 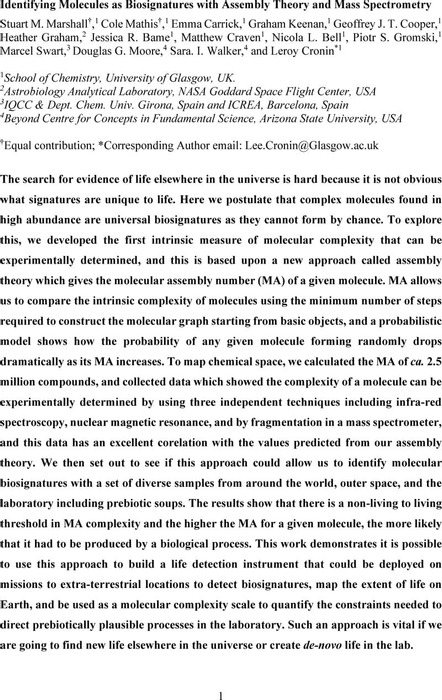