In this study, atmospheric pressure single photon ionization (APSPLI) mass spectrometry utilizing a fluorine excimer laser operated at 157 nm (7.9 eV) is presented for the first time. For evaluation and optimization, PAH standard mixtures introduced by gas chromatography were used. Atmospheric pressure laser ionization (APLI) approaches with laser wavelengths above 200 nm induce a multiphoton process, and ionization yields are strongly dependent on the heteroatom-content and isomeric structure. The presented technique using VUV photons allowed for the selective ionization of semi- to non-polar compounds in a single photon ionization process. Consequently, molecular radical cations were found as base peak, whereas protonated species were almost absent. Even though the ionization chamber is flushed by a high flow of pure nitrogen, remaining oxygen and water traces caused several side-reactions, leading to unwanted oxidized ionization artifacts. Installation of a water and oxygen filter cartridge significantly reduced the abundance of those artifacts, whereas the laser beam position was found to have a substantially lower effect. For evaluating complex mixture analysis, APSPLI was applied to characterize a light crude oil subjected to the ionization source by thermogravimetry and gas chromatography hyphenation. In addition to aromatic hydrocarbons, APSPLI also allowed for the sensitive ionization of sulfur-containing aromatic constituents, and even species with two sulfur-atoms could be detected. A comparison of APSPLI to APLI conducted at 266 nm revealed the additional compositional space accessible by the single photon process. This novel ionization concept is envisioned to have a high analytical potential further explored in the future. 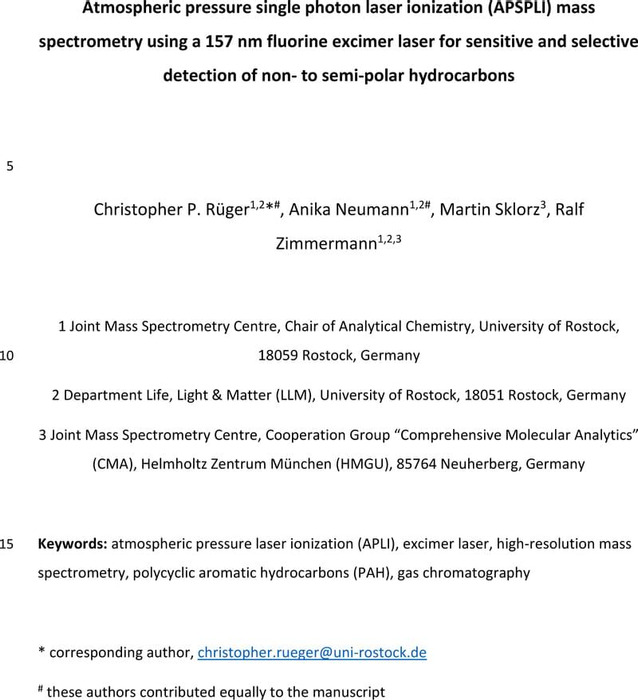 download asset Manuscript_for_preprint_server.pdf 2 MB [opens in a new tab] cloud_download
pdf : 2 MB
We are encoding your file so that it is compatible across browsers, depending on file size and type this may take some time.