An Open Drug Discovery Competition: Experimental Validation of Predictive Models in a Series of Novel Antimalarials

The discovery of new antimalarial medicines with novel mechanisms of action is key to combating the problem of increasing resistance to our frontline treatments. The Open Source Malaria (OSM) consortium has been developing compounds ("Series 4") that have potent activity against Plasmodium falciparum in vitro and in vivo and that have been suggested to act through the inhibition of PfATP4, an essential membrane ion pump that regulates the parasite’s intracellular Na+ concentration. The structure of PfATP4 is yet to be determined. In the absence of structural information about this target, a public competition was created to develop a model that would allow the prediction of anti-PfATP4 activity among Series 4 compounds, thereby reducing project costs associated with the unnecessary synthesis of inactive compounds.

In the first round, in 2016, six participants used the open data collated by OSM to develop moderately predictive models using diverse methods. Notably, all submitted models were available to all other participants in real time. Since then further bioactivity data have been acquired and machine learning methods have rapidly developed, so a second round of the competition was undertaken, in 2019, again with freely-donated models that other participants could see. The best-performing models from this second round were used to predict novel inhibitory molecules, of which several were synthesised and evaluated against the parasite. One such compound, containing a motif that the human chemists familiar with this series would have dismissed as ill-advised, was active. The project demonstrated the abilities of new machine learning methods in the prediction of active compounds where there is no biological target structure, frequently the central problem in phenotypic drug discovery. Since all data and participant interactions remain in the public domain, this research project “lives” and may be improved by others. 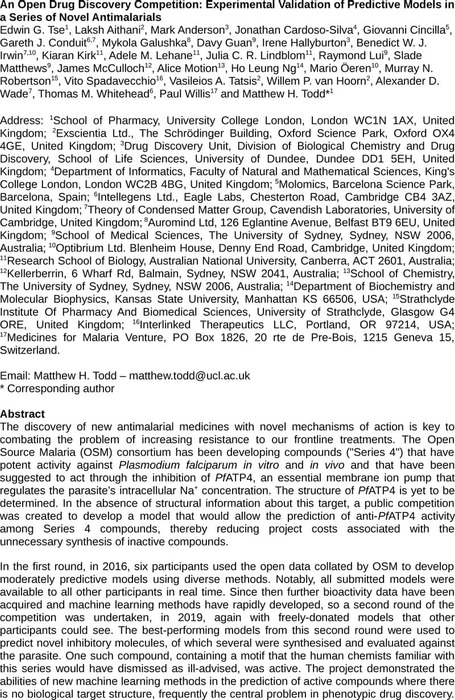 We are encoding your file so that it is compatible across browsers, depending on file size and type this may take some time.
SI V3