The presence of amino acids on the prebiotic Earth, either stemming from endogenous chemical routes or delivered by meteorites, is consensually accepted. In contrast, prebiotically plausible pathways to achieve peptides from unactivated amino acids are still unclear since most oligomerization approaches rely on thermodynamically disfavored reactions in solution. Alternative hypotheses such as the prebiotic impact scenario postulate that the mechanical impacts from meteorites and geochemical phenomena played an important role in delivering exogenous material to Earth, thus providing the geochemical, mechanical, and thermal conditions to synthesize small prebiotic organic compounds in the absence of bulk liquid media. In this context, here we evaluate the applicability of mechanochemistry by ball milling for peptide bond formation under a prebiotic impact scenario. We found that the combination of mechanical forces and prebiotically plausible and ubiquitous minerals as activators enable the oligomerization of amino acids such as glycine in the absence of bulk water (or solvents) and at ambient temperature. Increasing the mechanochemical reactor’s temperature is shown to favor the degree of polymerization concomitantly with the formation of cyclic glycine dimer [cyclo(Gly2) or DKP], a product commonly considered as a dead-end in solution peptide bond formation. However, our study shows that DKP can be mechanochemically activated and used as a source for glycine oligomers. The findings of this research provide alternative mechanochemical routes towards oligopeptides and establish new synthetic approaches for prebiotic chemistry that are not limited by poor diffusion of the reactants, thus complementing the current alternating wetting and drying prebiotic environment strategy. 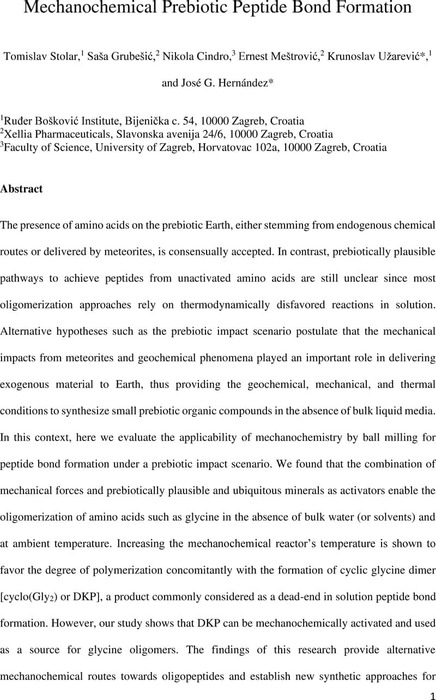 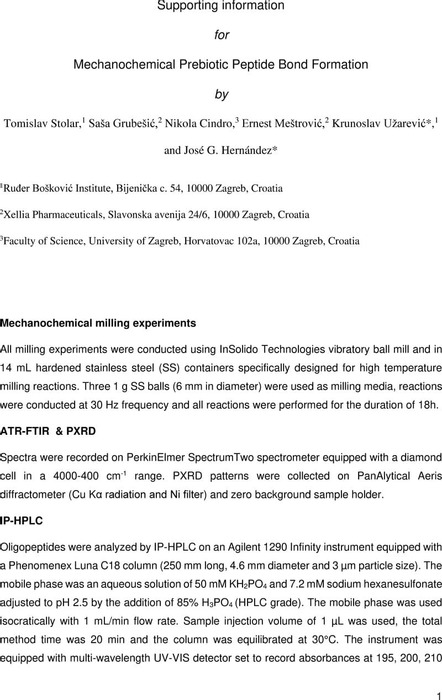 We are encoding your file so that it is compatible across browsers, depending on file size and type this may take some time.
Peptide paper-SI