The acceleration of Faradaic reactions by oscillating electric potentials has emerged as a viable tool to enhance electrocatalysis, but the non-Faradaic dynamic promotion of thermal catalytic processes remains to be proven. Here, we present experimental evidence showing that oscillating potentials are capable of enhancing the rate of ethylene hydrogenation despite no promotion effect was observed under static potentials. The non-Faradaic dynamic enhancement reaches up to 553% on a Pd/C electrode when cycling between –0.25 VNHE and 0.55 VNHE under optimized conditions with a frequency of around 0.1 Hz and a duty cycle of 99%. Under those conditions, no stoichiometric electron transfer to ethylene can be observed, confirming the non-Faradaic nature of the process. Experiments in different electrolytes reveal a good correlation between the catalytic enhancement and the doublelayer capacitance – a measure for the interfacial electric field strength. Preliminary kinetic data suggests that cycling to a low potential increases the hydrogen adsorption on the catalyst surface while at higher potential, the ethylene adsorption and hydrogenation becomes relatively more favorable 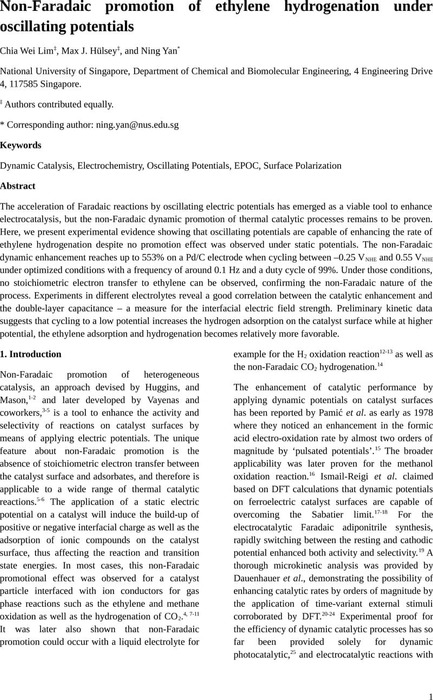