Here we report on a molecular catalyst with a built-in electron-reservoir for enhanced CO2 conversion. The synthesis and characterization of this N-annulated perylene diimide (PDI) photosensitized Re(bpy) supramolecular dyad [Re(bpy-TAz-PDI)], as well as successful electro- and photocatalytic CO2-to-CO conversion, are detailed herein. Upon electrochemical reduction in the presence of CO2 and a proton source, Re(bpy-TAz-PDI) exhibited significant current enhancement, where the onset of electrocatalytic CO2 reduction for Re(bpy-TAz-PDI) occurred at a much less negative potential than standard Re(bpy) complexes. At an applied potential of -1.8 V vs. Fc+/0, 400 mV lower than the benchmark Re(dmbpy) catalyst, Re(bpy-TAz-PDI) was able to achieve the same catalytic activity (TONco = 24) and Faradaic efficiency (FE = 92 %) during controlled potential electrolysis (CPE) experiments. Through a combination of UV-visible-nearIR spectroelectrochemistry (SEC), FTIR SEC, and chemical reduction experiments, it was shown that the PDI-moiety served as an electron-reservoir for Re(bpy), thereby allowing catalytic activity at lower overpotentials. Density functional theory (DFT) studies probing the optimized geometries, frontier molecular orbitals, and spin-densities of various catalytic intermediates revealed that the geometric configuration of PDI, relative to the Re(bpy)-moiety, plays a critical role in accessing electrons from the electron-reservoir. The near identical performance of Re(bpy-TAz-PDI) at lower overpotentials relative to the benchmark Re(dmbpy) catalyst highlights the utility of organic chromophore electron-reservoirs as a method for lowering the required overpotential for CO2 conversion. 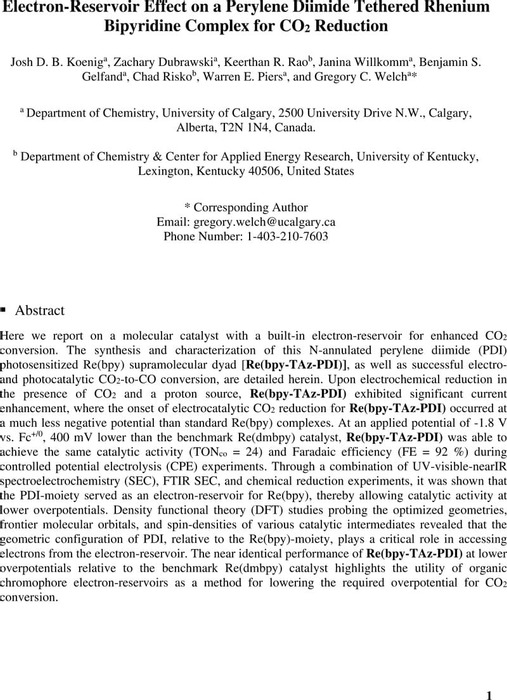