Self-assembly of photoresponsive molecules is a robust technology for reversibly tuning the chemical and electronic properties of functional materials. In most systems the photoactive group is separated from the surface by a spacer and thus the photo-responsiveness does not benefit from interactions with the metal. Herein, the impact of metal photoactive-group interactions on photoswitchability and surface potential were probed by self-assembly of N-heterocyclic carbene molecules (NHCs) that were functionalized with stilbene group directly on their imidazole ring. Stilbene-NHCs that were adsorbed on weakly interacting Au surface accumulated a vertical orientation, as identified by FTIR measurements. This positioning enabled structural flexibility and high photoisomerization efficiency that induced reversible changes in surface potential. Stilbene-NHCs that were anchored on Pt film accumulated flat-lying adsorption geometry due to strong metal-adsorbate interactions. These interactions limited the structural flexibility of the stilbene groups and induced deteriorated photoswitchability that led to lower photoinduced changes in surface potential. While stronger metal-adsorbate interactions hindered the photo-induced isomerization yield of stilbene, these interactions prompted the cis-to-trans thermal-induced isomerization rate, which was an order of magnitude higher on Pt than on Au. 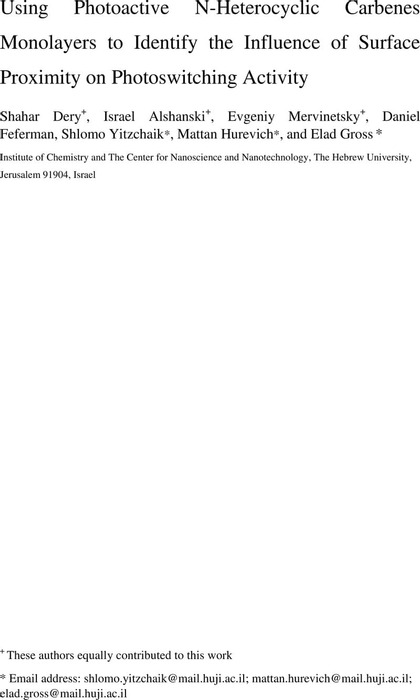 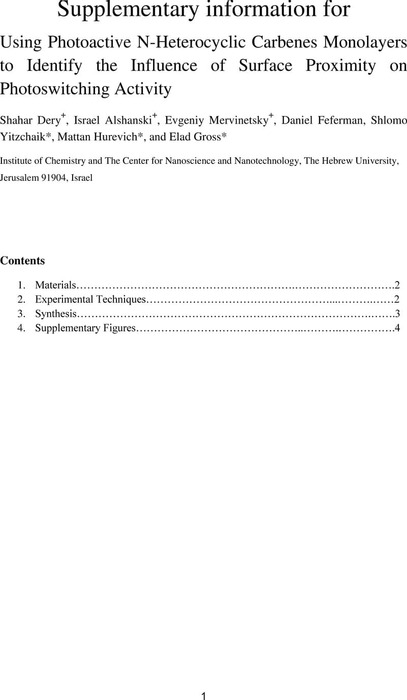 We are encoding your file so that it is compatible across browsers, depending on file size and type this may take some time.
SI-NHC-stilbene

No conflict of interests