Two-dimensional (2D) benzoxazole-linked covalent organic frameworks (COFs) provide an opportunity to incorporate the strength and modulus of corresponding 1D rigid-rod polymers into multiple directions by extending covalent bonding into two dimensions while simultaneously reducing density. Thus far, this potential has been elusive because of the challenge of producing high-quality COF films, particularly those with irreversible, rigid benzazole linkages. The majority of COF syntheses use a single-step process approach where polymerization occurs faster than crystallization and typically result in a poorly ordered and insoluble powder. Here, we present a one-step synthesis and two-step process that allows the deposition of a uniform intermediate film via reversible, non-covalent interactions. This network then undergoes an annealing step that facilitates the irreversible conversion to 2D covalently-bonded polymer product. The resulting films are semi-crystalline with platelet-like crystals embedded in an amorphous matrix with sharp crystal-amorphous interfaces. By this approach, we achieve free-standing films for which we demonstrate the first example of mechanical testing of benzazole-linked COFs. These initial films have promising mechanical properties with an in-plane ultimate tensile strength of nearly 50 MPa and axial tensile and transverse compressive elastic moduli on the scale of several GPa. These mechanical properties already rival the performance of solution-cast films of 1D polybenzoxazole (PBO). 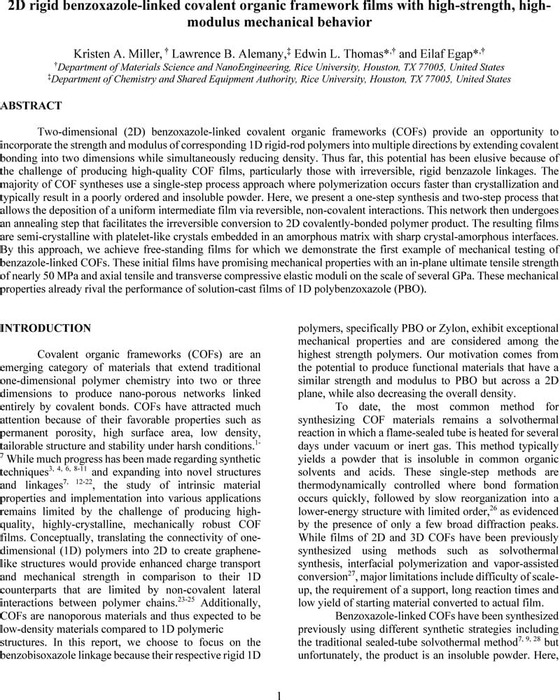 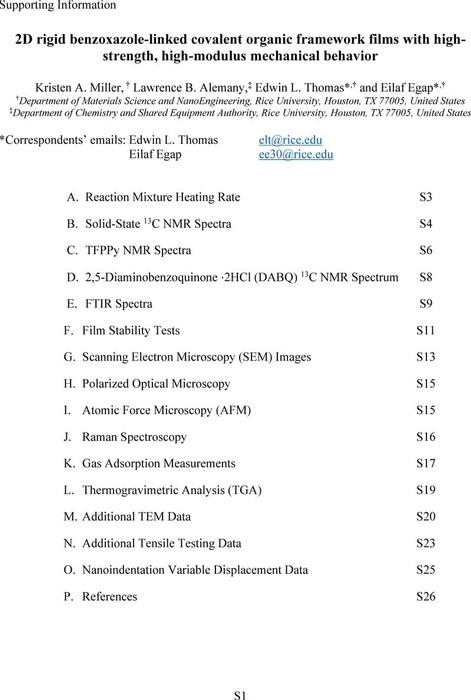 We are encoding your file so that it is compatible across browsers, depending on file size and type this may take some time.
SI Miller ChemRxiv 10-15-20