Carbonyl and amine are yin and yang in organocatalysis that mutually activate and transform each other. As intrinsically reacting partners, carbonyl and amine tend to condensate, depleting their individual activity when employed as catalysts. Though widely established as prominent catalytic strategies, aminocatalysis and carbonyl catalysis seems not coexist well and a cooperative amine/carbonyl dual catalysis remains virtually unknown. Here we report a cooperative primary amine and ketone dual catalysis in the asymmetric α-hydroxylation with H2O2. Besides participating in the typical enamine catalytic cycle, the chiral primary amine catalyst was found to work cooperatively with a ketone catalyst to activate H2O2 via an oxaziridine intermediate derived from in-situ generated ketimine intermediate. The resulted enamine-oxaziridine coupling then facilitated highly-controlled hydroxylation of β-ketocarbonyls that are not possible with other catalytic methods. The dual catalytic approach allows for highly enantioselective α-hydroxylation of a broad range of β-ketocarbonyls. Particularly, late-stage hydroxylation for peptidyl amide or chiral esters can also be achieved with high stereoselectivity. With its operational simplicity and mild conditions, this cooperative amine/ketone catalysis provides a new strategy in catalytic activation of H2O2 and expands the domain of typical amine and carbonyl catalysis to include those challenging transformations. 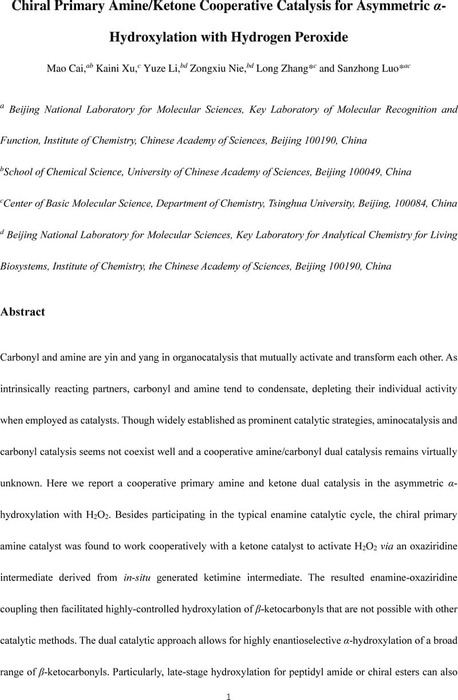 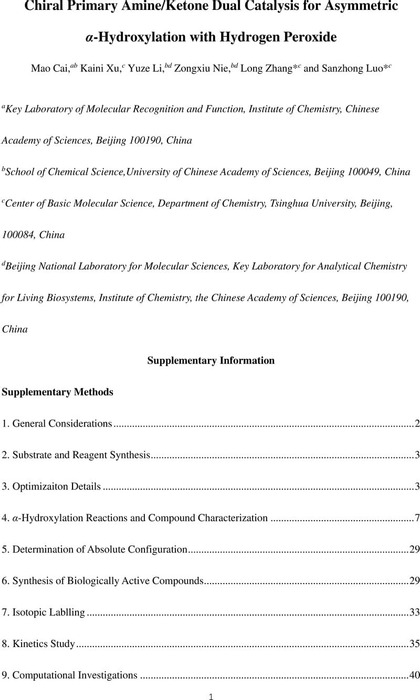 We are encoding your file so that it is compatible across browsers, depending on file size and type this may take some time.
ChemRxiv-Cai Mao-SI-Oct. 6

no conflict of interests