Anticancer Mechanism of Withania Somnifera and Its Bioactive Compounds : A Short Review Along with Computational Molecular Docking Study

Withania somnifera, known as Aswogondha in Bangladesh and some part of India, is a shrub of Solanceae family. Parts of this plant is used as alternative medicine in this region to cure diseases from bronchitis to insomnia. Although such use of the plant is not supported by clinical research, recent studies have found anticancer activity of some proteins derived from w. somnifera. The purpose of this study is to summarize the anticancer activity of medicinal plant Withania somnifera and its bioactive compounds as well as to predict the interaction between phytochemicals (Withanolide, Withaferin-A) and macromolecules that are responsible for cancer cell proliferation. Studies suggested that Withanolide and Withaferin-A from W. somnifera can be used as a cancer chemotherapeutic agent for cancerous cell lines in mice models through modulating various signaling pathway including inhibition, autophagy, apoptosis, radiopreventive pathway and reactive oxygen species pathway. Molecular docking of Withanolide and Withaferin-A against 9 types of vital protein mediators concluded that 3A8X (Protein kinase C iota type) and 1A9U (MAP KINASE P38) are the most active receptor for binding and interacting with Withanolide and Withaferin-A for the prevention and treatment of cancer. On the basis of this review and docking study, it can be concluded that Withania somnifera as well as its derivatives Withanolide and Withaferin-A may be considered as a promising anticancer agent. 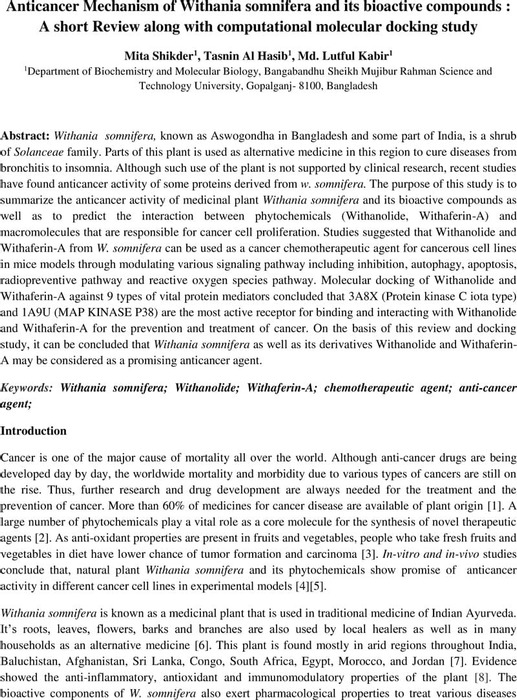 We are encoding your file so that it is compatible across browsers, depending on file size and type this may take some time.
w-somnifera-final document

There is NO conflict of interest