We use cookies to distinguish you from other users and to provide you with a better experience on our websites. Close this message to accept cookies or find out how to manage your cookie settings. Learn more about our Privacy Notice... [opens in a new tab]
Organometallic Chemistry
search

Coupled mechanical forces are known to drive a range of covalent chemical reactions, but the interplay of mechanical force applied to a spectator ligand and transition metal reactivity is relatively unexplored. Here we report the effect of mechanical force on the rate of C(sp2)-C(sp2) reductive elimination from platinum(II) diaryl complexes containing macrocyclic bis(phosphine) force probe ligands. Compressive forces decreased the rate of reductive elimination whereas extension forces increased the rate of reductive elimination relative to the strain-free MeOBiphep complex with a 3.4-fold change in rate over a ~290 pN range of restoring forces. The natural bite angle of the free ligand changes with force, but 31P NMR analysis strongly suggests no significant force-induced perturbation of the ground state geometry of the (P–P)PtAr2 complexes. Rather, the force/rate behavior observed across this range of forces (from ca. 65 pN in compression to >200 pN in extension) for reductive elimination is attributed to the coupling of force to the elongation of the O…O distance in the transition state for reductive elimination. The results suggest opportunities to experimentally map geometry changes associated with reactions in transition metal complexes and potential strat-egies for force-modulated catalysis. 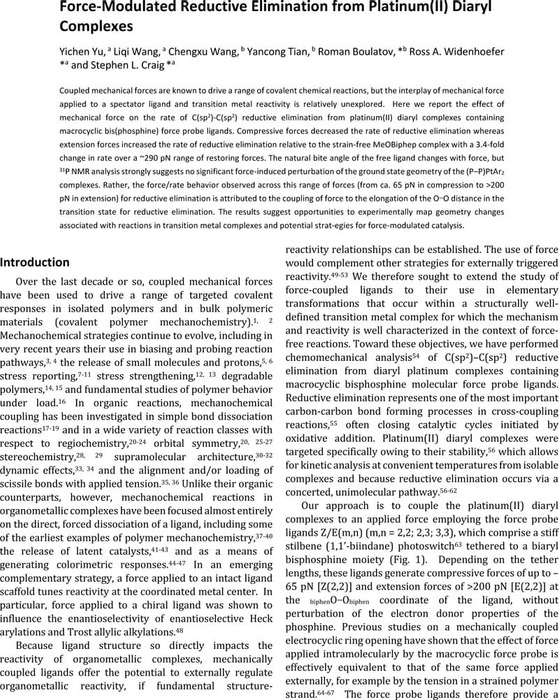