Antiproliferative, cholinesterase and phosphodiesterase inhibitory activity of the DCM sub-extract of Uvaria alba: In vitro and in silico perspectives

Aims: To evaluate the in vitro antiproliferative, anticholinesterase and anti-phosphodiesterase activities of the sub-extracts of Uvaria alba (family Annonaceae) and explore putative binding mechanisms of its chemical constituents in silico.
Main methods: U. alba sub-extracts, obtained by solvent-solvent partition, were subjected to antiproliferative and cytotoxicity screening against chronic myelogenous leukemia (K-562) and human cervical cancer (HeLa) cells, respectively. Inhibitory assays against acetylcholinesterase (AChE) and phosphodiesterase (PDE4 B2) enzymes were also performed. The dichloromethane sub-extract (UaD) was chemically profiled using LC-HR-ESIMS-QToF to identify secondary metabolites 1–18. Molecular docking and molecular dynamics simulations were performed to determine the affinity of the putatively annotated metabolites against PDE4 B2B, AChE, ubiquitin specific peptidase 14 (USP14), and Kelch-like ECH-associated protein 1 (Keap1). In addition, DFT calculations were also performed to demonstrate Michael addition reaction between electrophilic cytotoxic metabolites and Cys151 of the Keap1-BTB domain.
Key findings: UaD showed antiproliferative and cytostatic activities against K-562 and HeLa, respectively, and inhibitory activities against AChE and PDE4 B2. Meanwhile, its polyphenolic constituents 3-(3,4-dihydroxybenzyl)-3’,4’,6-trihydroxy-2,4-dimethoxychalcone (8) and grandifloracin (15) showed favorable binding to AChE and Keap1-BTB domain, respectively. The most electrophilic and kinetically stable grandifloracin (15), favorably formed a beta-addition adduct with the Cys151 of Keap1 via Michael addition. The top-ranked ligand-protein complexes attained dynamic stability at 50-ns simulations with high free energy of binding. The top-ranked compounds also conferred favorable in silico pharmacokinetic properties.
Significance: The study highlights the role of U. alba secondary metabolites as potential inhibitors against the aforementioned target proteins in an effort to discover new drug leads for cancer and Alzheimer’s.

This is the first draft of the paper. 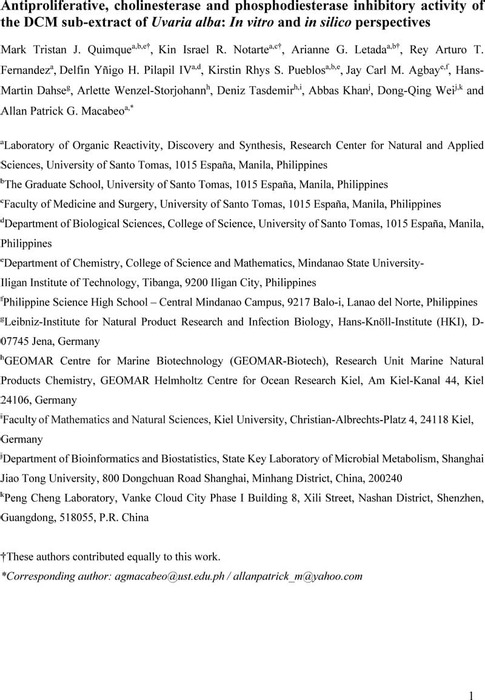 download asset Manuscript.pdf 16 MB [opens in a new tab] cloud_download
pdf : 16 MB
We are encoding your file so that it is compatible across browsers, depending on file size and type this may take some time. 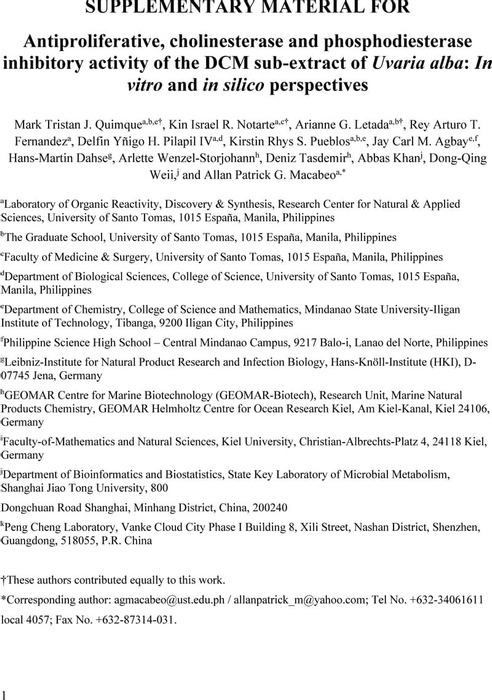 The authors declare that they have no conflict of interests.