The communication describes the application of a fluorocarbon-based polymer as a high performance binder component for coatings suitable for a variety of solid phase microextraction (SPME) configurations. SPME devices are characterized by their ability to perform physicochemical extraction of chemical compounds from a given sample, rending said chemical compounds suitable for instrumental determinations; fundamentally speaking, physiochemical extraction is accomplished by thermodynamic equilibrium driven by diffusion and partitioning of chemical compounds. A polyvinylidene difluoride (PVDF) polymer was used to immobilize various sorbent particles on different supports to create different formats of SPME, namely fiber, thin-film membrane, and CBS devices. In this report, PVDF-based coatings are introduced as universal SPME coatings that are amenable to both gas chromatography (GC) and liquid chromatography (LC) while also improving the physical stability of the resulting device, in addition to eliminating the need for highly toxic reagents associated with the preparation of fully fluorinated based coatings previously reported in the literature. Additional incorporation of other polymers to increase coating porosity as well as the adhesion of PVDF on metal surfaces is also described. 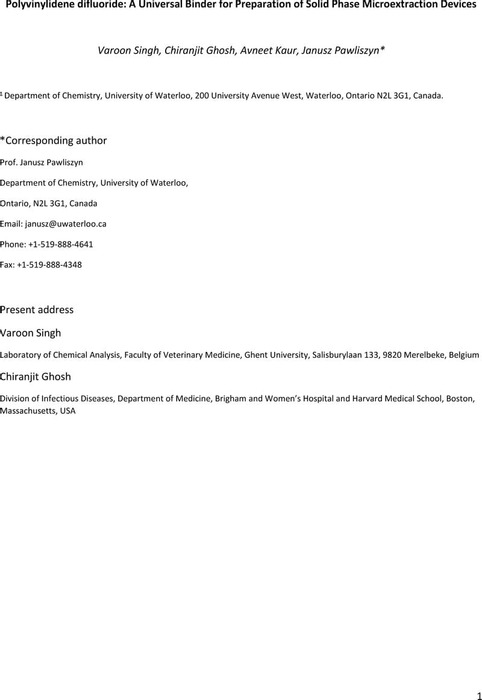 download asset PVDFf.pdf 3 MB [opens in a new tab] cloud_download
pdf : 3 MB
We are encoding your file so that it is compatible across browsers, depending on file size and type this may take some time.

download asset PVDFf.docx 11 MB [opens in a new tab] cloud_download
docx : 11 MB
We are encoding your file so that it is compatible across browsers, depending on file size and type this may take some time.
PVDFf