Cellulose-based functional materials have gained immense interest due to its low density, hydrophilicity, chirality, and degradability. So far, a facile and scalable preparation of fibrillated cellulose by treating the hydroxy groups of cellulose with citric acid (F-CAC) have been developed, and applied as a reinforcing filler for polypropylene composite. Herein, a size-selective preparation of Au nanoparticles (NPs) stabilized by F-CAC is described. By modifying the conditions of trans-deposition method, established in our group previously, a transfer of Au NPs from poly(N-vinyl-2-pyrrolidone) (PVP) to F-CAC proceeded up to 96% transfer efficiency with retaining its cluster sizes in EtOH. Meanwhile, the deposition efficiency drastically decreased in the case of non-modified cellulose, showing the significance of citric acid-modification. A shift of binding energy at Au 4f core level X-ray photoelectron microscopy (XPS) from 82.0 eV to 83.3 eV indicated that the NPs were stabilized on a F-CAC surface rather than by PVP matrix. The reproducible particle size growth was observed when 2-propanol was used as a solvent instead of EtOH, expanding the range of the available particle size with simple manipulation. The thus-obtained Au:F-CAC nanocatalysts exhibited a catalytic activity toward an aerobic oxidation of 1-indonol in toluene to yield 1-indanone quantitatively, and were recyclable at least 6 times, illustrating high tolerance against organic solvents. 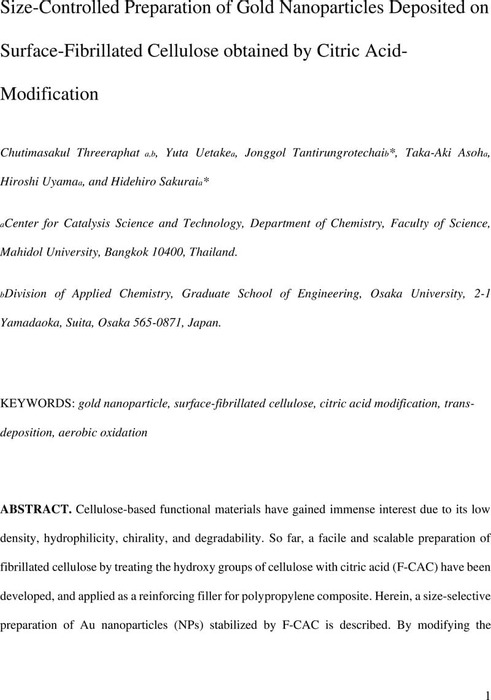 download asset Champ_celluloseMS_20200913.pdf 0.95 MB [opens in a new tab] cloud_download
pdf : 0.95 MB
We are encoding your file so that it is compatible across browsers, depending on file size and type this may take some time. 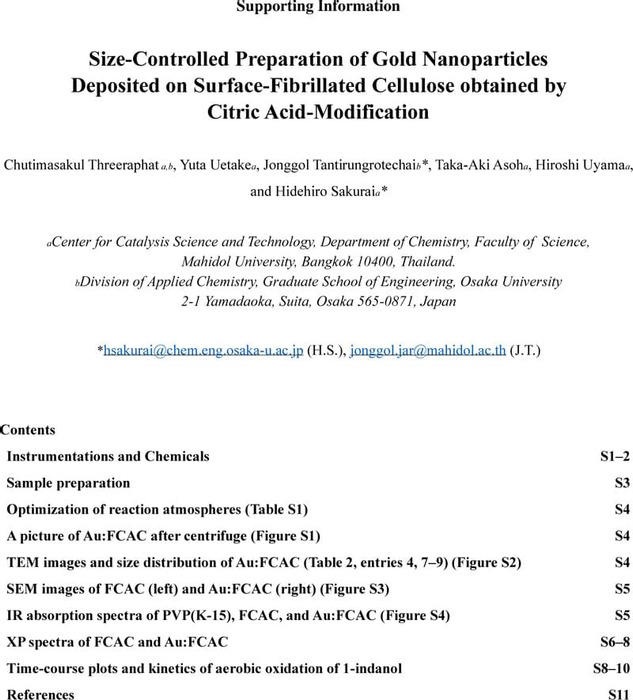 download asset Champ_celluloseESI_20200913.pdf 0.74 MB [opens in a new tab] cloud_download
pdf : 0.74 MB
We are encoding your file so that it is compatible across browsers, depending on file size and type this may take some time.
Champ celluloseESI 20200913