Molecules confined in the nanocavity and nanointerface exhibits rich of unique physicochemical properties, e.g., green fluorescent protein (GFP). However, the physical origin of their photoluminescence (PL) emission remains elusive. To mimic the microenvironment of GFP protein scaffold at the molecule level, two groups of nanocavities were created by molecule self-assembling using organic chromophores and by organic functionalization of mesoporous silica, respectively. We provide strong evidence that, the hydrogen-bonded water clusters (WCs) confined in these nanocavities are true color emitters with a universal formula of {X+ ∙(OH- ∙H2O)(H2O)n-1}, in which X is hydrated protons (H3O+ ) or protonated amino (NH3 + ) groups. Further controlled experiments and combined characterizations by time-resolved steady-state and ultra-fast transient optical spectroscopy showed that, the PL efficiency of WCs strongly depends on the type and stability of WCs structure, which is dominated by H-Bonds. Differing from the local excitation of organic chromophores, the excited state of WCs has the characteristic of the topological excitations due to the many-body nuclear quantum effect (MBNQE) in confined nanocavity. 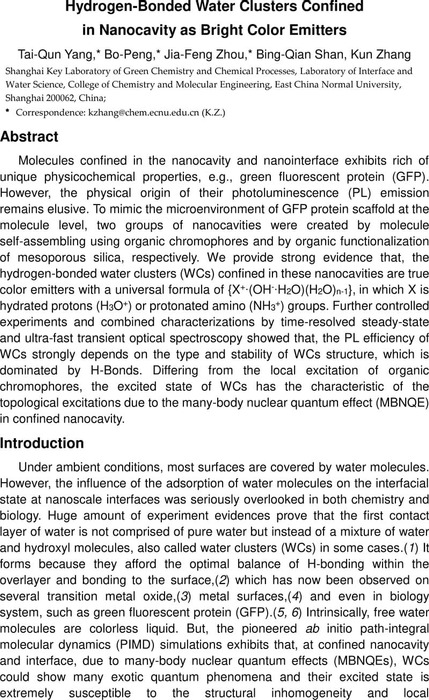 We are encoding your file so that it is compatible across browsers, depending on file size and type this may take some time.
JACS-manu2020-YTQ-PB-ZJF