Tuning the Thermal Stability and Photoisomerization of Azoheteroarenes through Macrocycle Strain

Azobenzene and its derivatives are one of the most-widespread molecular scaffolds in a range of modern applications, as well as in fundamental research. After photoexcitation, azo-based photoswitches revert back to the most stable isomer in a timescale (t1/2) that determines the range of potential applications. Attempts to bring t1/2 to extreme values prompted to the development of azobenzene and azoheteroarene derivatives that either rebalance the E- and Z- isomer stabilities, or exploit unconventional thermal isomerization mechanisms. In the former case, one successful strategy has been the creation of macrocycle strain, which tends to impact the E/Z stability asymmetrically, and thus significantly modifies t1/2. On the bright side, bridged derivatives have shown an improved optical switching owing to the higher quantum yields and absence of degradation. However, in most (if not all) cases, bridged derivatives display a reversed thermal stability (more stable Z-isomer), and smaller t1/2 than the acyclic counterparts, which restricts their potential interest to applications requiring a fast forward and backwards switch. In this paper, we investigate the impact of alkyl bridges to the thermal stability of phenyl-azoheteroarenes using computational methods, and we reveal that is indeed possible to combine such improved photo-switching characteristics while preserving the regular thermal stability (more stable E-isomer), and increased t1/2 values under the appropriate connectivity and bridge length. 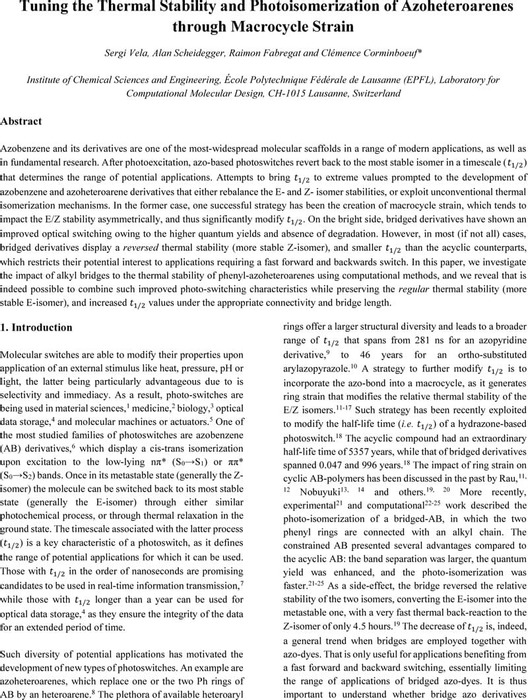 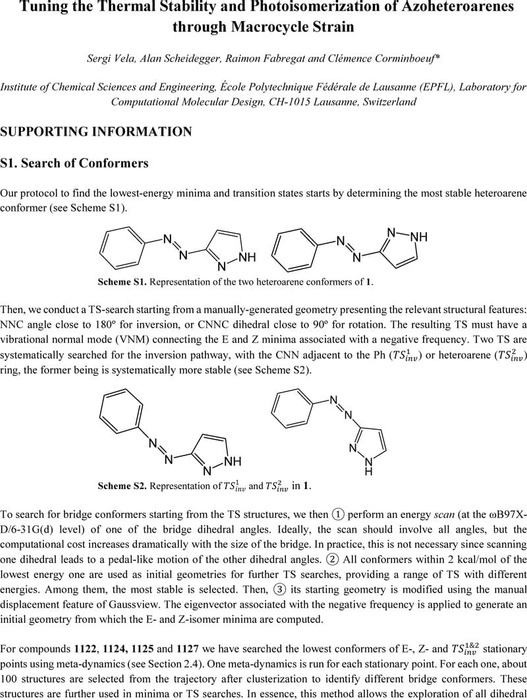 We are encoding your file so that it is compatible across browsers, depending on file size and type this may take some time.
P3 ESI

No conflicts of interest to be declared