Liquid-liquid phase separation of disordered proteins has emerged as a ubiquitous route to membraneless compartments in living cells, and similar coacervates may have played a role when the first cells formed. However, existing coacervates are typically made of multiple macromolecular components, and designing short peptide analogues capable of self-coacervation has proven difficult. Here, we present a short peptide synthon for phase separation, made of only two dipeptide stickers linked via a flexible, hydrophilic spacer. These small-molecule compounds self-coacervate into micrometre-sized liquid droplets at sub-mM concentrations, which retain up to 75 weight-% water. The design is general and we derive guidelines for the required sticker hydrophobicity and spacer polarity. To illustrate their potential as protocells, we create a disulphide-linked derivative that undergoes reversible compartmentalisation controlled by redox chemistry. The resulting coacervates sequester and melt nucleic acids, and act as microreactors that catalyse two different anabolic reactions yielding molecules of increasing complexity. This provides a stepping stone for new protocells made of single peptide species. 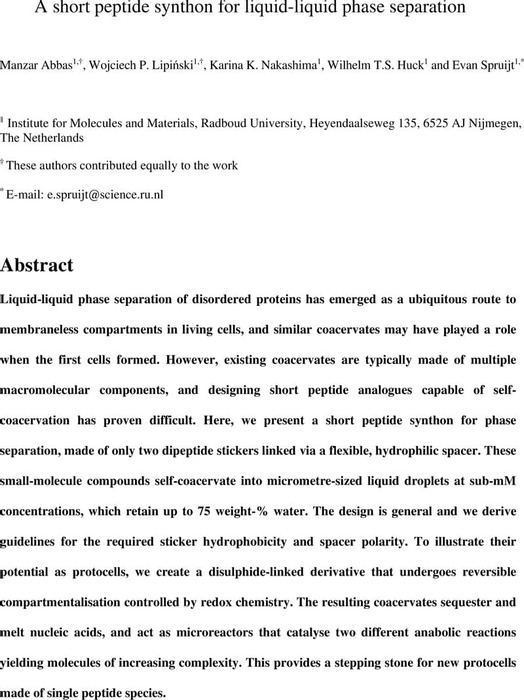 download asset PepSynthonLLPSv1.pdf 1 MB [opens in a new tab] cloud_download
pdf : 1 MB
We are encoding your file so that it is compatible across browsers, depending on file size and type this may take some time. 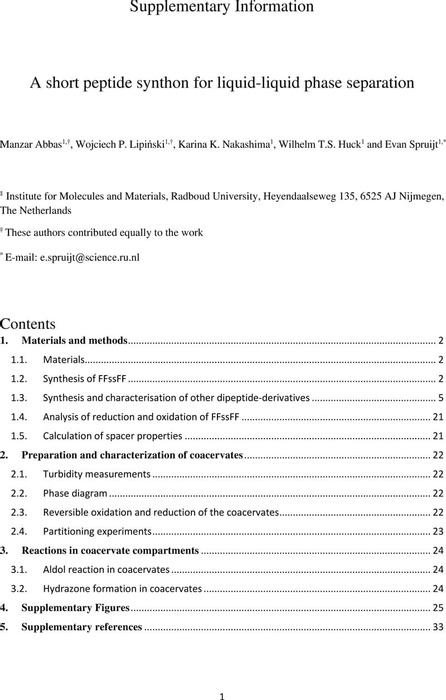 download asset PepSynthonLLPSv1_SuppInfo.pdf 8 MB [opens in a new tab] cloud_download
pdf : 8 MB
We are encoding your file so that it is compatible across browsers, depending on file size and type this may take some time.
PepSynthonLLPSv1 SuppInfo

The authors declare no competing interests.