Methylalumoxane (MAO), a perennially useful activator for olefin polymerization precatalysts, is famously intractable to structural elucidation, consisting as it does of a complex mixture of oligomers generated from hydrolysis of pyrophoric trimethylaluminum (TMA). Electrospray ionization mass spectrometry (ESI-MS) is capable of studying those oligomers that become charged during the activation process. We’ve exploited that ability to probe the synthesis of MAO in real time, starting less than a minute after the mixing of H2O and TMA and tracking the first half hour of reactivity. We find that the process does not involve an incremental build-up of oligomers; instead, oligomerization to species containing 12-15 aluminum atoms happens within a minute, with slower aggregation to higher molecular weight ions. The principal activated product of the benchtop synthesis is the same as that observed in industrial samples, namely [(MeAlO)16(Me3Al)6Me]–, and we have computationally located a new sheet structure for this ion 94 kJ mol-1 lower in Gibbs energy than any previously calculated. 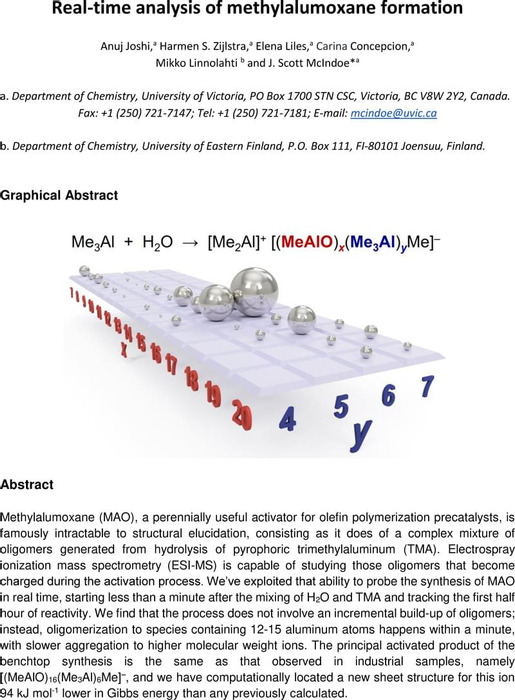 We are encoding your file so that it is compatible across browsers, depending on file size and type this may take some time.
Manuscript chemrxiv 200818 HZ CC ML EL AJ SM

We are encoding your file so that it is compatible across browsers, depending on file size and type this may take some time.
SI chemrxiv 200819 SM2 AJ2