Three-dimensional architectures constructed via coordination of metal ions to organic linkers (broadly termed as metal-organic frameworks, MOFs), are highly interesting for many demanding applications such as gas adsorption, molecular separation, heterogeneous catalysis, molecular sensing etc. Being constructed from heterogeneous components, such framework solids show characteristic features from both of the individual components as well as framework-specific features. One such interesting physicochemical property is thermal expansion, which arises from thermal vibration from the organic linker and metal ions. Herein, we show a very unique example of thermal responsiveness for DUT-49 framework, a MOF well-known for its distinctive negative gas adsorption (NGA) property. In the guest-free form, the framework shows another counter-intuitive phenomenon of negative thermal expansion (NTE), i.e. lattice size increase with decrease of temperature. However, in the solvated state, it shows both NTE and positive thermal expansion (i.e. lattice size decreases with lowering of temperature, PTE) based on a specific temperature range. When the solvent exists in liquid form inside the MOF pore, it retains the pristine NTE nature of the bare framework. But freezing of the solvent inside the pores induces a strain, which causes a structural transformation through in-plane bending of the linker and this squeezes the framework by ~10 % of the unit cell volume. This effect has been verified using 3 different solvents where the structural contraction occurs immediately at the freezing point of individual solvent. Furthermore, studies on a series of DUT-49(M) frameworks with varying metal confirm the general applicability of this mechanism. 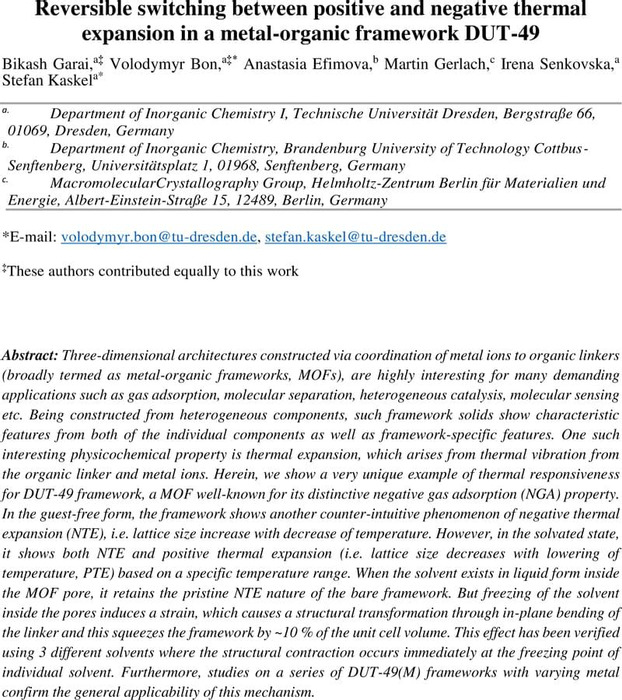 We are encoding your file so that it is compatible across browsers, depending on file size and type this may take some time.
crystal-structures 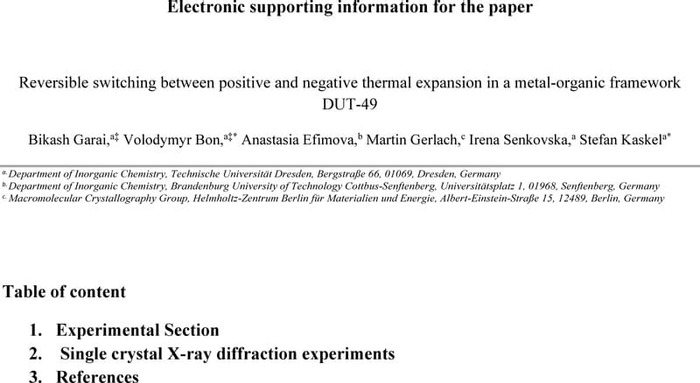 We are encoding your file so that it is compatible across browsers, depending on file size and type this may take some time.
DUT-49-M-temperature-SCD-Supporting information

No conflicts of interest are declared